In the Ganesh Chaturthi-special episode of ‘Dance Deewane 3’, Madhuri Dixit calls herself ‘ghar ki murgi' as Yami Gautam and Jacqueline Fernandez get praise. 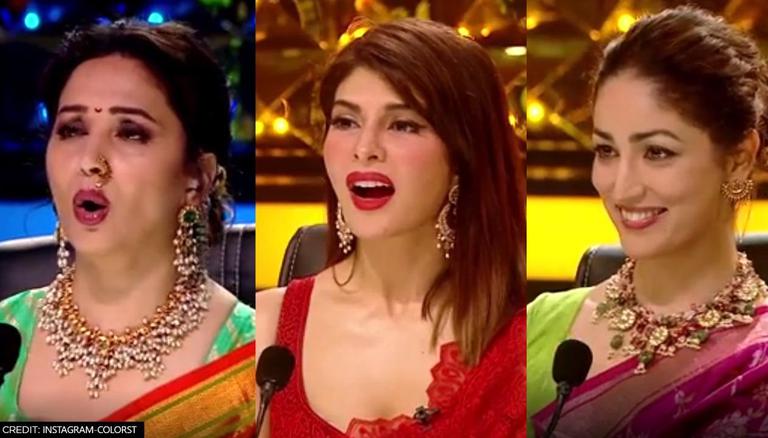 
Yami Gautam and Jacqueline Fernandez will soon feature in the upcoming episode of Dance Deewane 3. They will arrive to promote their next film, Bhoot Police. In the Ganesh Chaturthi-special episode, Madhuri Dixit refers to herself as ‘ghar ki murgi' and the Bhoot Police actors are praised.

According to reports by iwmbuzz.com, the upcoming episode of Dance Deewane 3 will feature Yami Gautam asking one of the contestants, Piyush Gurbhele who he thinks is cuter, her or Jacqueline Fernandez. Answering her question Piyush said that he thought Yami has cute eyes, while Jacqueline has a pretty smile. Hearing this, Madhuri Dixit, who has been a judge on the reality show since its first season said, “Mere liye kuch nai main ghar ki murgi daal barabar”.

Yami Gautam and Jacqueline Fernandez will soon be seen on screen in Bhoot Police. The upcoming film will also star Arjun Kapoor and Saif Ali Khan in lead roles and will mark the first time the two share the screen together. Saif will take on the role of a ghostbuster who is in the business only to con people. The name of his character will be Vibhooti, while Arjun will play the role of Chiraunji, who takes his profession of ghostbusting more seriously. The film will be released on September 10 and will stream on Disney+ Hotstar.

The makers of the film recently released a song from the film, Mujhe Pyaar Pyaar Hai. The romantic song features Arjun Kapoor and Yami Gautam. The music video gives the audience a sneak peek into the onscreen chemistry and romance between the two. The number was sung by Armaan Malik and Shreya Ghoshal, while Sachin and Jigar were the composers of the song. With the lyrics penned down by Priya Saraiya, Arjun Kapoor called the number the ‘most romantic song of the season' in an Instagram post.

Madhuri Dixit will soon make her digital debut with Netflix’s Finding Anamika. The suspense family drama focuses on a global personality, wife and mother, who vanishes into thin air. When the police try to look for answers, hidden secrets are brought to light.

WE RECOMMEND
Madhuri Dixit wishes Asha Bhosle on b'day; says 'I've enjoyed expressing to your vocals'
Yami Gautam on her role in 'Bhoot Police': 'Got to do something I haven't done'
Madhuri Dixit and Shriram Nene's son Arin joins college in California, See pics
Yami Gautam on her simple wedding with Aditya Dhar: 'We didn't believe in pomp and show'
Teachers' Day 2021: Madhuri Dixit pays tribute to teachers in new post