At the Emmy Awards 2019, 'GOT' stars in the likes of Kit Harington, Sophie Turner, Maisie Williams came together, However, one incident from it is going viral

At the 2019 Emmy Awards 2019, 'GOT' stars gathered under one roof, in the likes of Kit Harington, Sophie Turner, Maisie Williams, and others and caught on camera was a rather emotional reunion. Sophie Turner and Kit Harington who play the role of Stark sibling were seen hugging each other before the ceremony and it has hit fans and netizens right in the feels.

Ever since the video has been posted, the internet can't stop raving about the heartwarming hug. "This is so cute", "Aww", "This literally made my day", were some of the comments on the post. Read reactions below-

Me watching that Sophie Turner and Kit Harington video for the 1000th time #Emmys pic.twitter.com/9BA0dHtcRa

Sansa seeing Jon when he visits Winterfell from beyond the Wall #emmys pic.twitter.com/v2usrFkllD

The critically acclaimed series won the Best Drama Series Award, along with Peter Dinklage, who plays the role of Tyrion Lannister in the show bagging the Outstanding Supporting Actor in a Drama Series. 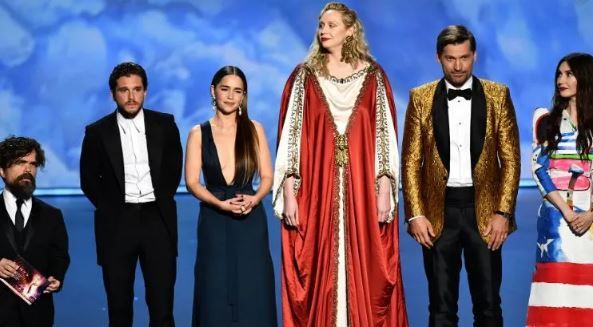