'Kundali Bhagya' actor Sanjay Gagnani who plays the role of Prithvi Malhotra on the show recently tied the knot with Poonam Preet Bhatia. See the pictures. 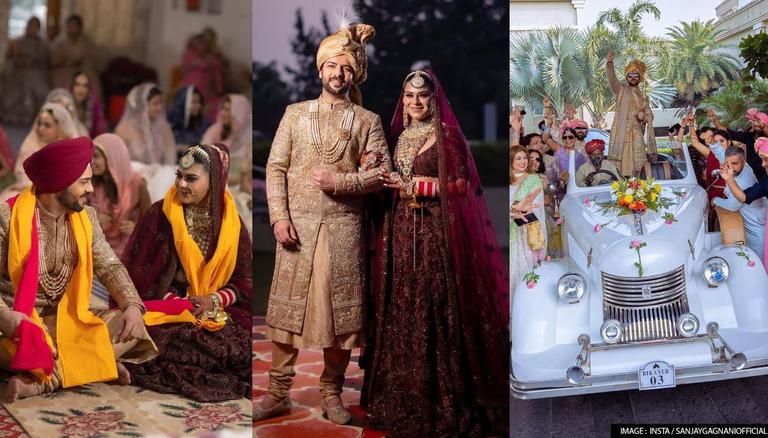 
Kundali Bhagya actor Sanjay Gagnani who plays the role of Prithvi Malhotra on the show recently tied the knot with Poonam Preet Bhatia. The couple had a Sikh wedding. The wedding had a list of co-actors, including Anjum Fakih, Ruhi Chaturvedi, Abhishek Kapur, and Supriya Shukla among others.

Sanjay took to Instagram and shared a glimpse of his grand wedding celebrations, where the entire baraaat arrived at the wedding venue in a white vintage car. Anjum who plays the role of Srishti Arora on the show also took to Instagram and shared a bunch of pictures from the wedding with the bride and groom. "Shaadi ki bohot bohot mubarakbaad tum dono ko (congratulations for the wedding) @sanjaygagnaniofficial @poonampreet7. Wishing a lifetime of togetherness and unfiltered love to you both… Love and huggsss”, she wrote.  The two had been in a live-in relationship for some years now. The couple planned to marry in 2020 but lockdown delayed everything.

Anjum had even shared pictures from the sangeet ceremony and wrote, “Sangeet night.. done right…Aren’t they looking super amazing…@sanjaygagnaniofficial @poonampreet7 #poonjaykishaadi.” All of them are seen dressed for a cocktail party in the picture. The couple chose midnight blue for their sangeet ceremony. Sanjay Gagnani looked handsome in a tuxedo while Poonam Preet opted for an Indian style gown. The dress was from Pooja Peshoria. She carried off it with a princess vibe.

She also shared a glimpse of the haldi ceremony which had all of them dressed in yellow. Though Anjum was in purple, she wrote in caption, “Rahegi na koi kami, Chhutengi na koi Kasar… Pyar ka rang hai aisa chadha, Haldi/mehendi karegi Puri Asar…  (there will be no stone left unturned, the colour of love is so deep, turmeric and henna will have their effect) @sanjaygagnaniofficial @poonampreet7 Blessings Blessings and more Blessings to you both… Love y’all #poonjaykishaadyi.”

For the wedding, the bride looked endearing in a burgundy lehenga, while the groom looked perfect in a beige outfit. Sanjay Gagnani plays the antagonist Prithvi in Dheeraj Dhoopar-Shraddha Arya starrer Kundali Bhagya. Meanwhile, apart from Sanjay, his other Kundali Bhagya co-star Shraddha Arya also recently tied the knot with businessman Rahul Nagal in Delhi on November 16. Posting a few photos post their wedding, Shraddha wrote ‘Just married’ as the caption, adding a heart emoji to it. Rahul Nagal works in the navy, and they were introduced to each other by their families.