Popular actor Mandira Bedi, on Thursday, took to her social media handle and shared a video to give a peek into her 'banging workout' while sporting a bikini.

Actor Mandira Bedi, on Thursday, took to her social media handle and shared a video, in which she can be seen working out in a bikini. Interestingly, she can be seen performing lunge kicks and glute bridges. She also performed tricep dips with the help of the bath-tub placed behind her. Meanwhile, for the reel-video, she picked Jason Derulo's song Trumpets.

Instagramming the video, she wrote a short caption which read, "The Bathtub, the Bikini and the Banging workout!". She further added, "A nice mix of lunge kicks, glute bridges, tricep dips and a decent sweaty calorie burn!!". She concluded the caption with a Hindi sentence, which read, "Maine bhi Bikini mein Workout kiya! (I also workout in bikini!)". Her caption also featured numerous hashtags, such as "day 161", "365 days of exercise" and "get fit with mandy", among many others.

Mandira Bedi works out in a bikini

Within a couple of hours, the reel-video managed to garner a positive response from Bedi's Insta fam. Meanwhile, a couple of verified social media users and Mandira's acquaintances from the industry also took to the comments section and went gaga over Mandira. Actor Hansika Motwani dropped a heart-eyes emoji while Mouni Roy commented, "Miloooooo soon !!!".

READ | Mandira Bedi's home in Madh Island enlisted on Airbnb, check out its rent for one night

On the other hand, a section of the Dilwale Dulhania Le Jayenge actor's fans flooded the comments section with fire and red-heart emoticons. An Instagram user wrote, "You are incredible", while another added, "Workout is a hunger, it’s an habit. Learning form you everyday. Cheers!!". One word compliments such as "insane", "amazing" and "outstanding", among many others, were a common sight in the comments box. 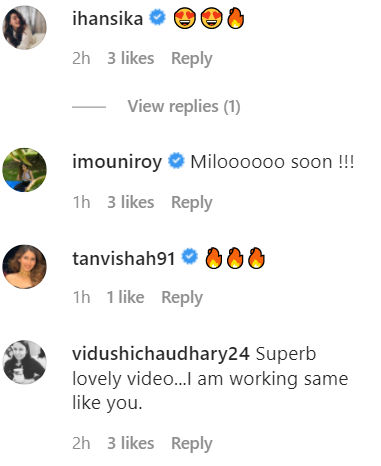 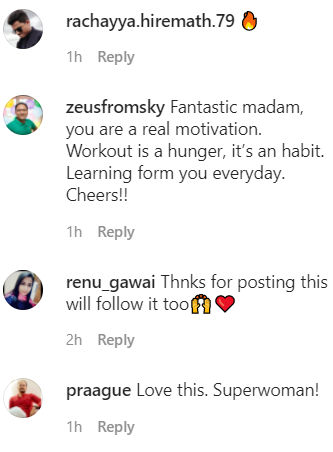 Interestingly, the 48-year-old actor is an avid social media user as she keeps her fans posted with her whereabouts. In a couple of videos, she has illustrated a few workout routines for her fans. Apart from workout videos, she also shared one-liner motivational thoughts with her 1,4M Instagram followers. Interestingly, with her previous post, she urged her fans to stay tuned with their vibes and her note-post read, "What is meant for you won't lower your vibration".