Maniesh Paul Talks About His Wife, Says, 'I Am Where I Am Only Because Of Her'

Maniesh Paul talks about his love story and how he met his wife Sanyukta; credits the latter for achieving heights in his career and life; read the story here. 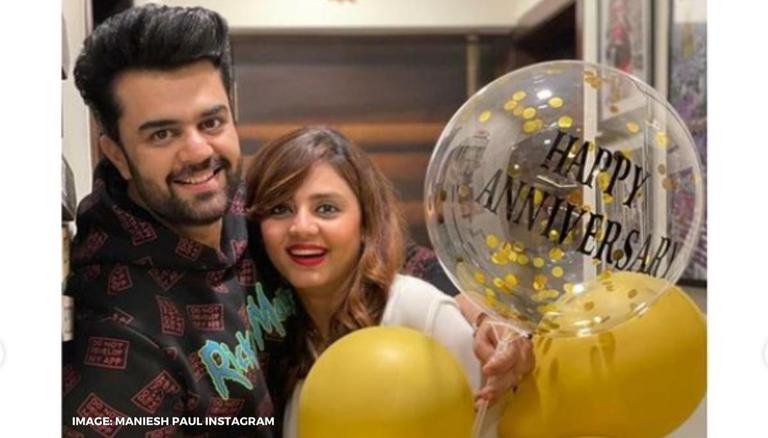 
Actor and TV anchor Maniesh Paul, in a recent interview, shared how he met his wife Sanyukta, and how the latter has helped him get through all the ups and downs in his life. Read further to know the couple’s adorable story; and a glimpse of their family.

The actor recently featured on the Humans of Bombay page on Instagram, in a post that they shared on May 20, 2021. Maniesh revealed that he and his wife, Sanyukta have known each other for as long as they were toddlers and went to the nursery grade. The first memory that he shared of them together is from a fancy dress that they were a part of in 3rd grade.

Maniesh said, “My first memory of Sanyukta was at this fancy dress competition in the 3rd grade–she’d dressed up as Mother Teresa and I, as Raj Kapoor. We’d known each other since nursery, but we hadn’t interacted–she was studious & I hated studying”. Further adding that the two became close friends when he started taking tuition from Sanyukta’s mom and then became best friends. He mentioned, “But when I started taking tuition from her Mom, we bonded. I’d convince her to do all my homework; Sanyukta would happily do it. She was also the first one to know about my breakups!”.

The actor then opened up about the time when he realised, he had feelings for his now-wife. He said, “In 11th grade, once, when she & I were at the theatre, I got a call asking if I could host an event; I used to anchor part-time. I just left her there & ran to work. I thought she’d be mad, but she said, ‘It’s totally fine.’ That’s when I realised, I had feelings for her”.

Further on Maniesh revealed how he confessed his feeling towards her and said, “So, a few weeks later, I told her, ‘I like you.’ 3 days later, we were official!”. He explained how he went to Sanyukta’s house every day with the excuse of studying, but actually to meet her and how her father would tease him. He said, “From then on, I’d go to Sanyukta’s house to meet her under the pretext of studying. Her Dad would tease me in Bengali, ‘Roz roz aa jata hai!’”.

Paul shared that the couple went to different colleges after 12th grade and yet found time to spend together each day; and also how Sanyukta supported his dream of being an actor. He said, “After 12th, we went to different colleges. Still, we’d meet once a day. I remember telling her, ‘I want to be an actor.’ She said, ‘If you really want to be an actor, you should move to Bombay”. Soon after, he moved to Bombay and once he had a full-time job, the two tied the knot in 2006, in a big fat Punjabi-Bengali wedding.

Manish further added how the couple couldn’t spend much time together and he was juggling jobs but Sanyukta never complained and supported him even when he went jobless for a year. He mentioned, “After moving in with me, Sanyukta took up a job as a teacher; I was juggling my job & a few anchoring assignments. We barely got any time together, but she never complained… not once. Then in 2008, I was jobless for a year–I didn’t even have the money to pay the house rent. But, Sanyukta took care of everything. She’d say, ‘Be patient–you’ll get a great opportunity soon’”.

Maniesh Paul further expressed that Sanyukta’s confidence in him did work out and things got better for him. The actor said, “And a year later, it did; I bagged a TV serial. Things started picking up–I went on to do reality shows & award nights”. The couple welcomed their daughter and son in 2011 and 2016, respectively and the post also features a picture of the family.

Maniesh said, “In 2011, we had a daughter & in 2016, a son. Finally I’m in a place where I can take time out for Sanyukta & my kids. And it’s a rule that I don’t talk about work on the dinner table”. He also stated that he finds himself absolutely lucky to have found Sanyukta and credits her for doing what he does. He said, “Sometimes, I wonder how I got so lucky? Without Sanyukta, I’d probably still be wondering what to do with my life. Or worse–failed my 10th grade! I am where I am only because of her”.