Gurmeet Choudhary took to Instagram on Tuesday, June 22, 2021, to share a quirky reel with his wife Debina Bonnerjee that is truly unmissable. Watch. 
Television actor Gurmeet Choudhary took to Instagram on Tuesday, June 22, 2021, to share a quirky reel that is truly unmissable. The actor shared a video with his wife Debina Bonnerjee and penned a note revealing details about the same. On seeing this post, fans have gone all out to flood the comment section with all things happy and nice.

Taking to his Instagram handle, Gurmeet Choudhary shared a quirky reel with his wife that is too sweet to miss. The duo shot the video on the street with lots of greenery around. The video also features their pet. In the video, the actor added Udit Narayan and Anuradha Paudwal’s song Akela Hai Mr Khiladi. Gurmeet is seen donning a white T-shirt and black trousers, while Debina wore a printed blue flowy dress. The actor captioned the post as, “Mr and Mrs Khiladi” and added the hashtags, “@debinabon #gurmeetchoudhary #reels #debinabonnerjee #tuesdayvibes #gurbina”. Take a look at Gurmeet Choudhary's Instagram post below.

As soon as the actor shared the post online, fans were quick enough to flood the comment section with all things happy and nice. Some of the users lauded the duo, while some could not stop gushing over the post. One of the users wrote, “super hit Jodi”. Another user wrote, “this is amazing. Love it”. Take a look at a few more comments below. 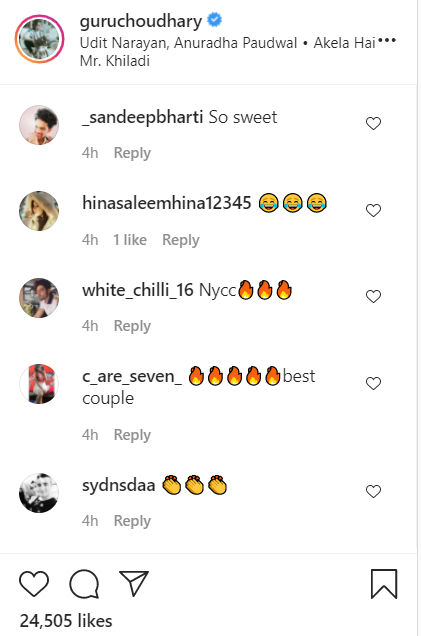 Gurmeet Choudhary appeared in the song Bedardi Se Pyaar Ka recently. Jubin Nautiyal sang the song, which also featured Sherine Singh, Kaashish Vohra, and Altamash Faraz. Gurmeet Choudhary and his wife Debina Bonnerjee re-created and shared their version of the song after it reached 40 million views on Instagram. Sharing the video Gurmeet wrote in his caption, "our version @debinabon #BedardiSePyaarKa made its way to your hearts and reached 40M views on YouTube. Tune in now". Watch the video below.

Gurmeet Choudhary established his own foundation to help people affected or affected by crises or health issues. During the pandemic, the actor assisted several people who had been affected by COVID. While announcing the launch of his foundation, Gurmeet wrote, "A small act of kindness can lead you to big possibilities and here I am today with @gurmeetchoudharyfoundation. While having faith and working really hard has been put in to help as many people as I could in the past and all that can be done for the people by the people in the future". He added, “Being human and behaving kind will never go out of style. So come love and support a movement I create for you all to help each other in any way possible because every act of help big or small will lead to happiness and blessings". Take a look.