In one of the clips, Juhi can be seen speaking about an unknown connection between her and Madhoo. Scroll down to read more. 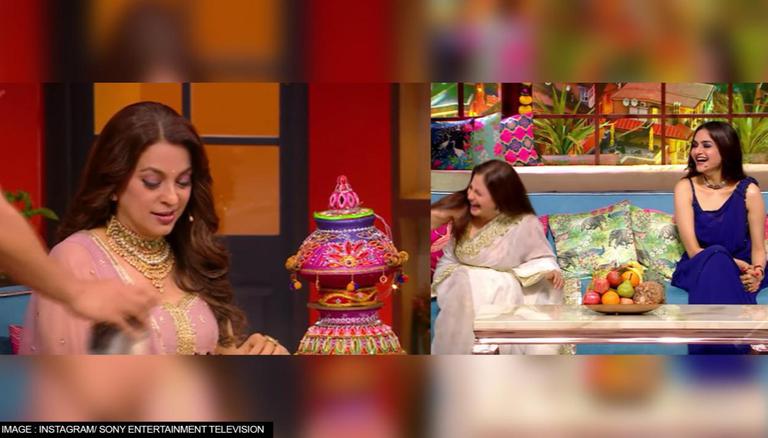 
Sony Television's comedy show, The Kapil Sharma Show recently hosted three popular Bollywood actors of the 90s'- Juhi Chawla, Ayesha Jhulka, and Madhoo Shah. Several promo clips have been shared by the channel on their Instagram handle. In a few videos shared Juhi can also be seen dancing with a cast member, Krushna Abhishek. In one of the clips, Juhi can be seen speaking about an unknown connection between her and Madhoo. Scroll down to read more.

Juhi Chawla on her connection with Madhoo Shah

During a conversation, host Kapil Sharma can be seen asking Juhi, "Mujhe abhi ek baat pata chali ki aap aur Madhoo ji aapas mein rishtedaar ho (I just got to know that you and Madhoo are related)." To which Juhi was quick to reply, "Ya. Ye meri devrani hai (Yes, she is my sister-in-law)."

Further speaking about the connection, Kapil stated, "Aapke pati bade hain, inke pati se…us hisaab se (Because your husband is older than her husband… like that)." He quipped, "Nahi toh heroine toh ek doosre se choti hi hoti hain humesha (Otherwise, heroines are always younger than each other)." Listening to Kapil's joke, everyone including the guest judge Archana Puran Singh burst into laughter.

Juhi Chawla and Jay Mehta got married in the year 1996. The actor kept the news of her wedding under wraps at first because she did not want it to affect her professionally. The couple is blessed with two children- Jahnavi and Arjun. The actor has appeared in numerous hit films like Darr, Qayamat Se Qayamat Tak, Yes Boss, Ishq, Dil Hai Hindustani, and Duplicate. Madhoo is married to Anand Shah. Jay and Anand are cousins. Madhoo has been featured in Roja, Phool Aur Kante, Diljale among others.

READ | 'I'll let you decide if it was a publicity stunt,' says Juhi Chawla on her fight versus 5G

Madhoo was recently seen in Kangana Ranaut starrer Thalaivii. The film is based on the life of the late Tamil Nadu chief minister and legendary actor J Jayalalithaa. Madhoo's father, P Raghunathan has produced the film. Furthermore, Madhoo is also the niece of Sholay star Hema Malini. The Kapil Sharma Show episode featuring Juhi, Madhoo, and Ayesha will be aired this weekend.

WE RECOMMEND
Juhi Chawla shares her cameo from a 1986 TV serial, 'Bahadur Shah Zafar'
Juhi Chawla clarifies her stance on the use of 5G technology, says she 'isn't against it'
Juhi Chawla shares photos of her stop 5G initiative; fans thank her for raising her voice
'TKSS': Juhi Chawla reveals original choice for lead role in 'Darr' in BTS video; WATCH
Juhi Chawla celebrates 23 years of 'Duplicate' with THIS superhit 90s song; watch
Listen to the latest songs, only on JioSaavn.com