A fan recently shared a post on Instagram imagining Aditi Rao Hydari as Audrey Hepburn and the actress responded to the comparison. See the full article below.


Ajeeb Daastaans' Aditi Rao Hydari recently reshared a story on her Instagram handle originally posted by a fan account of hers. The post features a clip of the late Audrey Hepburn from the film Roman Holiday in which she played the character of Princess Ann, along with a clip of Aditi Rao Hydari from the film V, in which she played the role of Saheba. The post also features an edited Hydari in a motion collage whose photo is made to resemble Hepburn's.

The photo shared by the fan talks about how Rao Hydari would look if she played the character of Princess Ann, as well as what Hepburn would look like if she played the character of Saheba. Aditi Rao Hydari's elegance, acting as well as her looks, in general, have often been compared to Audrey Hepburn's. The actress has even cited Hepburn as one of her favourite actresses in interviews, often posting social media images with Hepburn's quotes in the caption. 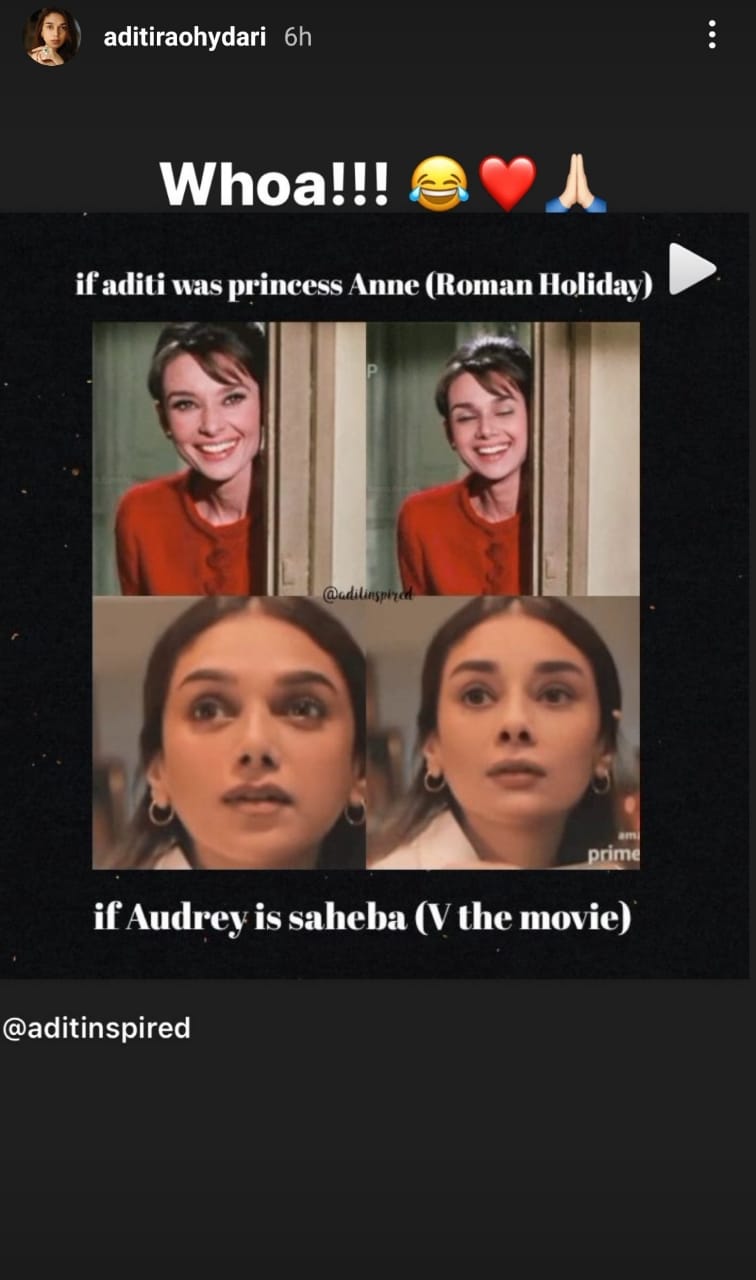 Aditi Rao Hydari has already delivered two power-packed performances this year. She appeared in the film, The Girl On The Train along with Parineeti Chopra. The actress was last seen in the Netflix anthology film Ajeeb Daastaans along with Konkona Sensharma. The film consists of four short film segments directed by Shashank Khaitan, Raj Mehta, Neeraj Ghaywan, and Kayoze Irani. It also features an ensemble cast of actors like Fatima Sana Shaikh, Jaideep Ahlawat, Nushrat Bharucha, Shefali Shah, and many others.

Aditi is all set to appear next in the upcoming Netflix film, Sardar Ka Grandson, along with actors like Arjun Kapoor, Neena Gupta, and others. The film is scheduled to release on May 18, 2021, on Netflix. The actress will also appear in the Tamil romantic comedy film Hey Sinamika, along with Dulquer Salmaan, Kajal Aggarwal, and Nakshatra Nagesh. Not much is known about the release of the film. Aditi will also appear in the action-drama film Maha Samudram, along with actors Sharwanand, Siddharth, and Anu Emmanuel. The film is shot simultaneously in Telugu and Tamil languages and is scheduled to release on August 19, 2021.