Army of the Dead was released on Netflix, recently. The fan theories have already poured in and one of them talks about the possible time loop. Read ahead. 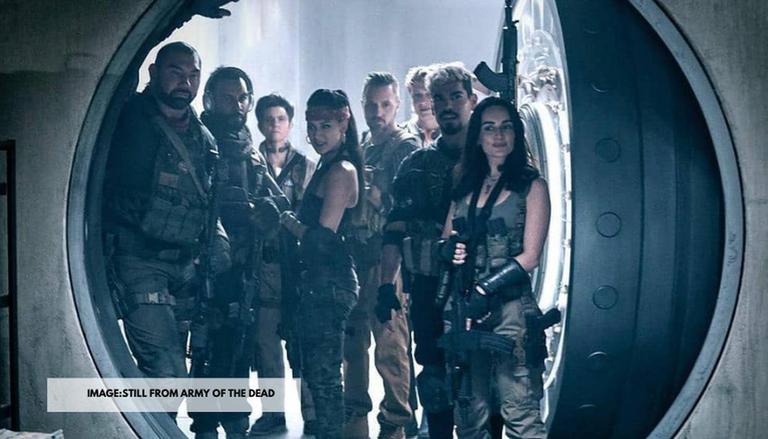 IMAGE: Still from Army of the Dead

As per Gameradar, Vanderohe's throwaway comments in the movie might actually be true. There were several social media posts that were pointing towards the possibility of Vanderohe's army time loop theory. One of the Twitter users pointed out the vault scene. In the scene, one of the corpses has a key necklace that is eerily similar to one worn by Maria Cruz. The skeleton version of the necklace has three holes, while that of the living Maria's necklace has four holes. There was even a dialogue that Dieter makes as they enter the vault, too. He says that he shoots the zombie bride three times before correcting himself and saying it was actually four. Vanderohe even mentions that they might be in another timeline and are caught in an infinite loop fighting and dying.

This was followed by another tweet from the same user pointing out how Vanderohe wasn't actually bitten by Zeus during their confrontation in the vault, even though he had bite marks in the end. The user mentions that if he wasn't bit by anyone, the epilogue that they saw has the possibility of being from another timeline. Check out the tweet.

He never actually got bit by Zeus, was the epilogue a different timeline? pic.twitter.com/y4wlpte88L

Lastly, another fan talked about the movie's montage sequence where Tanaka is telling Scott's group what the plan is. In the scene, we saw Guzman's friend is present during the time but he bails out at the last moment. Referring to this, the user said that this bailing out might be the reason why the entire mission went south and everybody died except Kate.

READ | If you loved 'Army of the Dead', here're some other movies by the cast that you may enjoy

Let’s say the multiverse and timeline theory is correct; what if the mission brief montage we saw was itself an alternate timeline where things went smoothly.

Notice how Mikey’s friend is present there but then he bails out after.

Talking about the time loop theory, Zack hasn't dismissed the possibility of it. While talking to The Film Junkee, the director said that there is a chance but he won't say that it is 100% true. He gives a hint by mentioning the group at the table and saying that it is very subtle.

IMAGE: Still from Army of the Dead