Friends Reunion: Matthew Perry Jokes 'I Don't Hear From Anyone' As Cast Reunites

FRIENDS Reunion: In the most awaited reunion episode, Matthew Perry being himself joked about how he hasn't heard from anyone, as cast answers some questions. 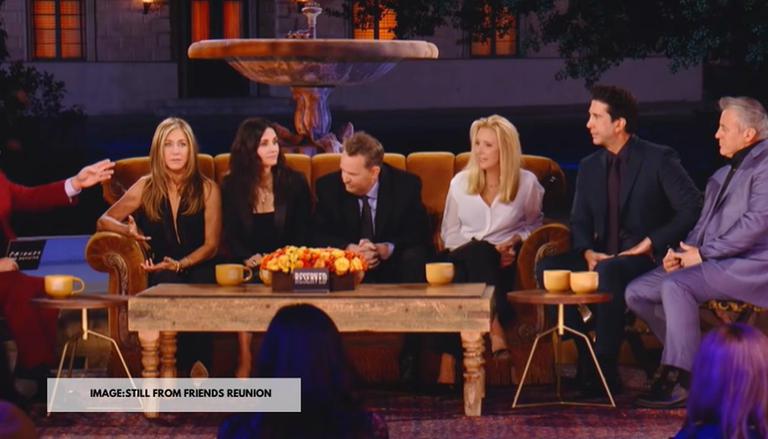 
The highly anticipated reunion of the cast of the iconic TV show FRIENDS has finally arrived. The stellar cast of Matthew Perry, Jennifer Aniston, Courtney Cox, David Schwimmer, Lisa Kudrow, and Matt LeBlanc was seen together exploring the set as well as talking to the host James Corden in front of the iconic fountain. During the conversation, James asked the cast if they kept in touch. This is what Matthew Perry said.

Matthew Perry's reply to staying in touch with the cast

The FRIENDS Reunion episode starts with the cast entering the stage and reliving the memories. After a little chit-chat, they move to the location of the iconic fountain and have a conversation with the host James Corden. After introducing the cast, James asks them how they are feeling. To which Jennifer Aniston replies that she feels fantastic and excited. On the other hand, David replies that he feels very emotional and that it is fun to be a part of the reunion.

The host then asks if the cast stays in touch years later after the show ended. Lisa steps in and answers that they stay in touch, not every day but they stay in touch. She further said that the cast has such a bond and have formed such a relationship that no matter when they call or text, the other person responds. The host then asks Matthew Perry about who doesn't pick up such calls. Matthew aka Chandler jokingly says "I don't hear from anyone" and everyone bursts into laughter.

READ | FRIENDS reunion: How did the makers get Bruce Willis to guest star on the show? Find out

The FRIENDS cast gathered for the comedy’s original soundstage, Stage 24, on the Warner Bros. Studio lot in Burbank for an unscripted celebration of the iconic NBC series. The reunion special shows their journey while making FRIENDS. They also play a scenario from the episode as well as read scripts from their favourite episodes. The main cast was joined by Tom Selleck, who appeared as Richard Burke, and Maggie Wheeler who appeared as a recurring character Janice in the show. Prolific celebrities like David Beckham, Justin Bieber, BTS, James Corden, Cindy Crawford, Lady Gaga, Reese Witherspoon, Cara Delevingne, Kit Harington, among several others appear as guest stars on the Reunion.

READ | FRIENDS reunion quiz: Can you complete these iconic dialogues from all the 10 seasons?

READ | FRIENDS reunion: A list of some lesser-known facts and trivia about the mega hit show
READ | FRIENDS Reunion special gets special Amul doodle, fans comment "Could I be more excited"