The 'Office Ladies', Jenna Fischer and Angela Kinsey recently revealed the identity of Jan's Sperm Donor from the show. Read more to know about it. 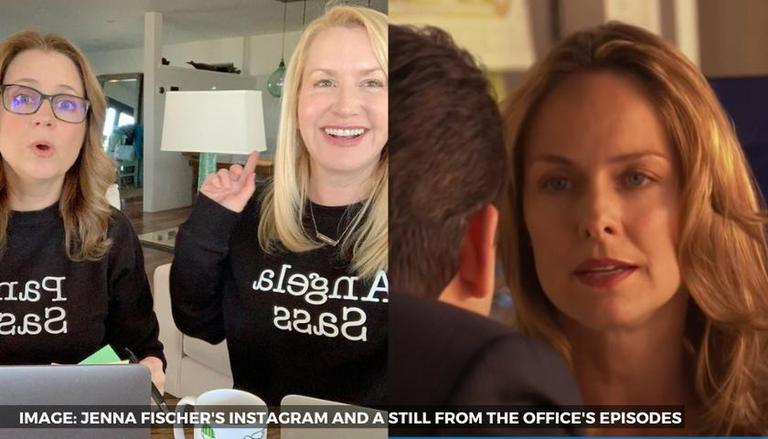 Image: Jenna Fischer's Instagram and a still from The Office's episodes


The Office actors Jenna Fischer who played Pam Beesly and Angela Kinsey who played Angela Martin run The Office's episodes re-watch podcast titled Office Ladies. During their recent episode of the podcast, Angela Kinsey and Pam Beesly revealed one of the biggest secrets from the show. It has been nearly 13 years since Jan dropped the bomb on Michael Scott that she was pregnant with a baby she conceived from a sperm donor while they were still together. Finally, the fans have some answers about who the sperm donor was. Here is a look at what The Office Ladies had to say about Jan's Sperm Donor.

Office Ladies Jenna Fischer and Angela Kinsey revealed that the sperm donor is none other than popular tennis player Andy Roddick! In one of The Office's episodes, Jan confirms that she got pregnant while she was in a relationship with Michael Scott. However, she assures Michael when she meets him that he is not the father of the kid. She went to a really good sperm bank next to IHOP and that's how she got pregnant. For the rest of the series, the audience remained dark about who was Jan's Sperm Donor. In the podcast, the Office Ladies shared that it is Tennis player Andy Roddick.

The duo in their podcast shared that this detail was in the original shooting draft of the script. However, it did not make it to the final cut. “Jan looks to Michael like she's expecting him to be very impressed. And Michael says, 'The tennis player?'” Angela Kinsey said while describing the scene. She added, "And Jan says, 'Well, it's a little more than that. He's the sixth-ranked player in the world and he's won four grand slams.' " She further mentioned, “And Michael says, 'That's a lot of grand slams, I guess.' And Jan says, 'And he's a humanitarian — something with orphans.' And Michael is quiet and Jan goes, 'Michael?' And Michael says, 'Can I just sit here for a minute without more things coming into my head?'"

Jenna Fischer further went on to explain that Andy Roddick was a good friend of Rainn Wilson who played Dwight Schrute on The Office. Andy Roddick used to visit the sets and was a big fan of The Office. She said. "I have to imagine that the reason they wrote it as being Andy Roddick's sperm was a little bit of a nod to Andy, who has an amazing sense of humour”. As soon as this news of Jan's Sperm Donor started doing the rounds on the internet, a lot of netizens took to social media and shared their surprised reaction to the big revelation. One such netizen read, “Learned today that Andy Roddick was the father of Jan’s baby from the sperm bank. The last piece of Office trivia is complete. #TheOffice” Here is a look at how netizens reacted to Andy Roddick being Jan's Sperm Donor.

READ | Kaitlyn Dever to star in 'Rosaline,' a fresh take on 'Romeo & Juliet'

Learned today that Andy Roddick was the father of Jan’s baby from the sperm bank. The last piece of Office trivia is complete. #TheOffice

Learned today that Andy Roddick was the father of Jan’s baby from the sperm bank. The last piece of Office trivia is complete. #TheOffice

Image: Jenna Fischer's Instagram and a still from The Office's episodes