What Did Five Say In Greek In The Umbrella Academy Season 2? Here Is What It Means

Many fans of The Umbrella Academy are confused about what Five said in Greek in the series' season 2. Find out what were his words & what they mean.

The Umbrella Academy Season 2 has been entertaining its audiences worldwide since its recent release on Netflix. The superhero story narrates the story of the Hargreeves, a dysfunctional family of seven adopted siblings, all of whom have superpowers. Over its two seasons, The Umbrella Academy has built a reputation for creating some of the most unexpected twists and outright bizarre angles in the story. Fans especially got curious in Season 2, when they heard one of their favourite characters on the show, Five speak in ancient Greek. Read on to find out, “What did Five say in Greek?”

Read | Who dies in the Umbrella Academy Season 2? Are Allison and Ben dead?

The Umbrella Academy Spoilers: What did Five say in Greek?

In The Umbrella Academy Season 2, episode 5, Reginald, Grace, and other scientists perform experiments on Pogo, seemingly with the intention of testing his intelligence. Pogo has been sent to space in a rocket but the ambitious experiment goes terribly wrong and Reginald Hargreeve uses a formula to bring him back to life. At this point, many fans noticed that Reginald reads Ancient Greek to Pogo, these are the same words which Five used in the last episode of the season.

Read | Where is The Umbrella Academy Season 2 filmed? Here are shooting locations

The ancient Greek words caught the attention of many fans, and a few of them have been scratching their heads to figure out, what they mean. While the show makers haven’t revealed these secrets yet, many fans took it upon themselves to decode Five’s ancient Greek Words. Here are some fan theories from r/UmbrellaAcademy on Reddit. The discussion started with one fan asking what the greek words meant and here are the theories that followed. 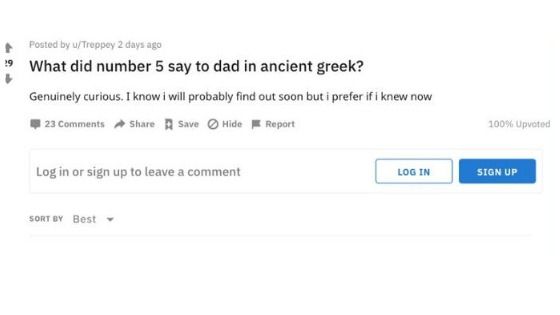 Read | What are 'The Umbrella Academy' Powers? Here's a full guide about character's superpowers

In the comments, a fan claimed to know mid-level Greek. As per the fan, they had found Five’s greek int the beginning pages of popular Greek poem by Homer, The Odyssey. These were the ancient greek words used in The Umbrella Academy Season 2, “á¼„νδρα μοι á¼”ννεπε, μοá¿¦σα, πολÏτροπον, á½ƒς μÎ¬λα πολλá½°.” The fan later proceeded to translate the words into English, and claimed that they meant, “tell me, o muse, of the man very much well-travelled man”. 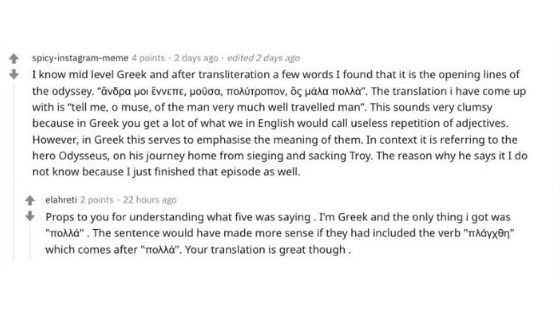 Read | How many episodes are there in 'The Umbrella Academy' Season 2? Find out

Another fan of The Umbrella Academy Season 2, claimed that Reginald Hargreeve translated the Greek words himself in the next episode. The fan went on to claim that these were the Greek words “ΤραγουδÎ®στε μÎ­σα μου, ΜοÏσε, και μÎ­σω μου πεÎ¯τε μου την ιστορÎ¯α αυτοÏ του ανθρÏŽπου με εξειδÎ¯κευση σε ÏŒλους τους τρÏŒπους της μÎ¬χης“ and they translate to - “Sing in me, Muse, and through me tell me the story of that man skilled in all ways of contending. ”However, this translation is also based on on-The Odyssey, by the Greek Poet Homer. 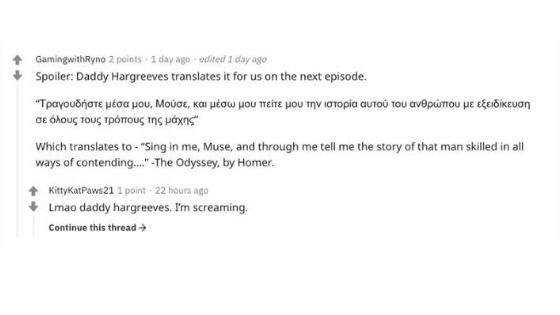