Coca-Cola Introduces 'new Can, New Formula', Netizens Say 'leave It The Way It Was'

As Coca-Cola announced that they will be altering the taste of Coca-Cola Zero Sugar, netizens flooded the comment section with all sorts of reactions. 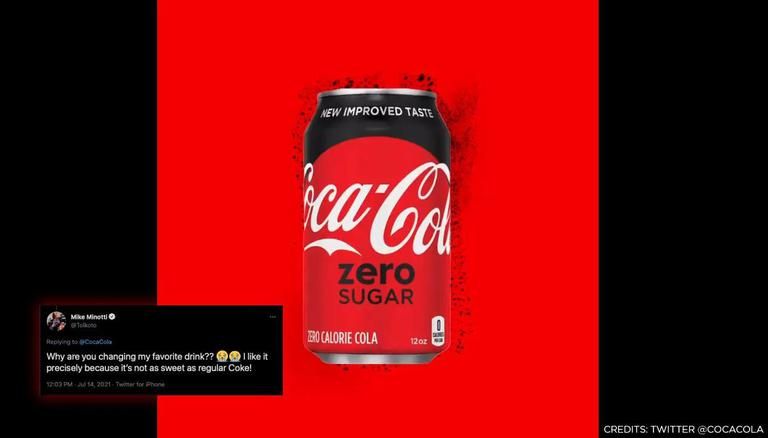 
As Coca-Cola announced that they will be altering the taste of Coca-Cola Zero Sugar (formerly Coke Zero), netizens flooded the comment section with all sorts of reactions. While taking to Twitter, the carbonated soft drink giant said that they were creating an “even more delicious and refreshing recipe” that will hit the shelves in India in August. As per the post, the new version of the drink will have a simplified packaging design anchored by the iconic Coca-Cola logo.

The recipe last changed in 1985 and the firm said the new recipe will ‘deliver an even more iconic Coke taste’. The company confirmed that the listed ingredients and nutritional information will remain the same on Coca-Cola Zero Sugar. “Recognising that tastes and preferences are always evolving, we’re focused on continuous improvement to give fans the best-tasting Coca-Cola they want – with zero sugar or calories – offered in the most iconic packaging and powered by some of our most creative, consumer-centric marketing yet,” said Coca-Cola spokesperson Rafael Prandini in a statement.

Netizens say 'life has no meaning'

Ever since Coca-Cola announced that it will be altering the taste of the drink, some fans took to the social media platform and expressed their excitement over trying the new soft drink, while others said that they were not quite ready to do so. “Why are you changing my favourite drink?? I like it precisely because it’s not as sweet as regular Coke!” said one user. “I just read that #cokezero is being reformulated. My life has no more meaning. @CocaCola,” said another.

One user even said, “WHY????? Our family love the old formula, #CokeZeroSugar is the ONLY soft drink we consume, why the change?” “You’d better have a backup plan if this as screwed up as New Coke was,” said third. “Why are you changing my favorite drink?? I like it precisely because it’s not as sweet as regular Coke,” wrote fourth.

Can’t wait to try it!!! Hope it tastes like Tab! I was forced to switch to Diet Pepsi-it sucks but not as bad as Diet Coke or Coke Zero did in comparison to my beloved Tab! 45 years with Tab … I miss Tab!!

Leave it the way it was! The red can looks awful. The black is easier to identify in a display case and we like that it’s not as sweet as regular Coke. Don’t try to fix what isn’t broken

I am not cool with changing the flavor of Coke Zero. The new can is not at all appealing to me, either.

What did you change? It was already good enough :(

@CocaCola I drink Coke Zero daily. I’m a Coca Cola collector as well. This has been the only no sugar beverage I truly enjoy & doesn’t mess with my keto diet. I sure hope these changes truly make it better, it was great already. 😃 pic.twitter.com/rn0eRWhqWE

The new can looks cool... But why are you messing with the formula of the best diet cola??!! pic.twitter.com/kdaP6vME6n

Nooo. Coke Zero was selling fine. It is nearly impossible to find in the whole county! Let alone cherry Coke Zero. Why spoil a good thing?!