Capable of conversing in 47 languages including 38 foreign languages and 9 local dialects, Patel’s prototype ‘Shalu’ is entirely made out of waste material.

Providing India with its own version, or rather more enhanced form of social humanoid robot ‘Sophia’, a computer science teacher at Kendriya Vidyalaya at Indian Institute of Technology (IIT) Bombay, Dinesh Patel has developed a humanoid robot named ‘Shalu’. Apart from just being ‘social’, Patel described in an exclusive conversation with Republic World that he tried to develop a “social and educational humanoid”.

Capable of conversing in 47 languages including 38 foreign languages and 9 local dialects, Patel’s prototype ‘Shalu’ is entirely made out of waste material such as plastic, aluminum, cardboard that had initially been discarded.  Dinesh Patel is a professor from Uttar Pradesh's Jaunpur and is presently teaching at Kendriya Vidyalaya. 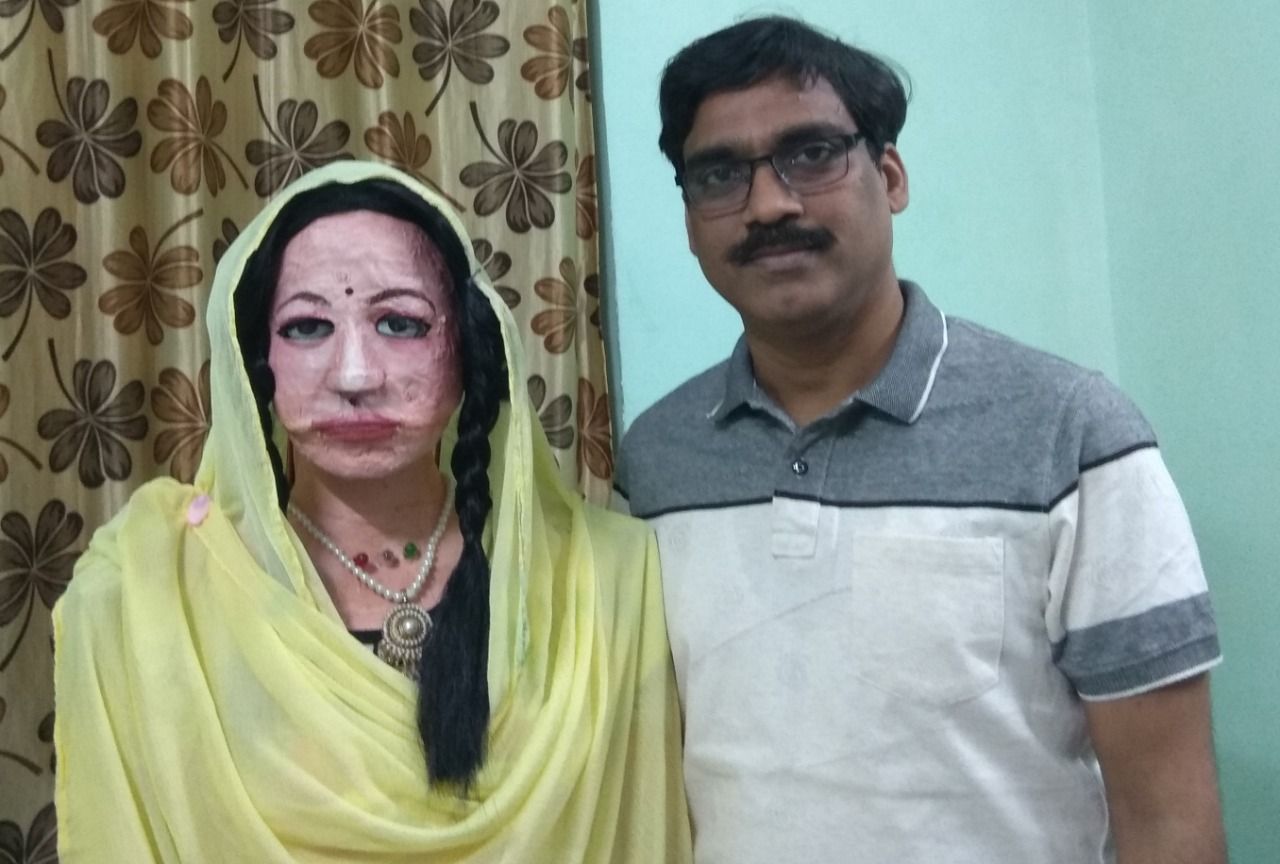 While talking to Republic World, Patel credited the Science fiction/Action movie of 2010, Robot that initially sparked the idea several years ago. In the film, Rajinikanth’s character Vaseegaran builds ‘Chitti’, a unique robot who is programmed to protect mankind while also having the ability to feel emotions. After watching the film, Patel wished for that to be in reality. However, when he finally learned about ‘Sophia’ the humanoid developed by Hong Kong-based company Hanson Robotics and was activated in 2014,he realised that it was possible and thus, started making his own efforts to finally develop ‘Shalu’.

Talking about the idea behind Shalu, Dinesh Patel said, “When I watched Rajnikanth’s film Robot, which was quite a long ago obviously, I had thought at the time, what if this was a reality. He wished for it to be in reality. However, it was just a  thought but I remember thinking that even while watching the film.”

“But when I finally saw Sophia, then I realised it is possible. It is achievable by humans. Then I thought if they can do it, even though they can do it brilliantly, we should also try something at least. And because I am a teacher in computer science, I believed that I can also do something similar. Then I started the process.” 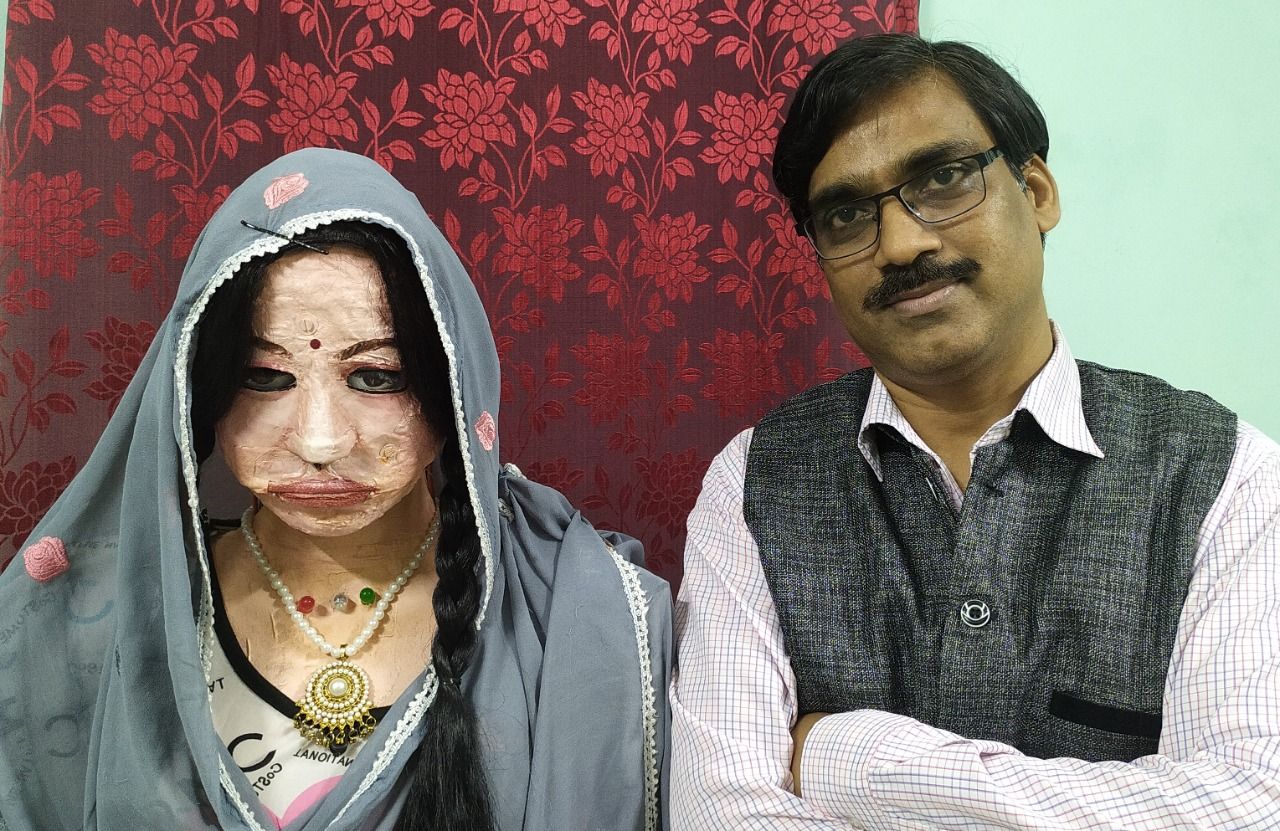 What all is ‘Shalu’ capable of?

Apart from being capable of speaking in several foreign languages and dialects that the world is aware of, Patel said that there is a lot that ‘Shalu’ can do. From shaking hands just like humans, she can also feel and express emotions. The Patel-developed humanoid can also joke with the individual or pass comments. “If we ask Shalu to tell a joke, she can do that also,” said the computer science teacher.

In terms of other robotic capabilities, the 100% out of waste humanoid that Patel developed in just Rs 50,000 (combining the cost of things that burned or lost at the time of testing), Shalu has all the abilities of a good teacher.

Patel said that Shalu can “reply to questions asked by students and asking own questions. She can also determine if the answer is correct or wrong. For instance, while taking an interview, if you answer ten questions, Shalu can justify how many answers were right or wrong. So she can conduct a short interview”

“If you tell it your date of birth, Shalu can tell your today’s horoscope. The humanoid can also tell the weather report. If you tell it the name of the place and date between the last 12 days approximately, Shalu can tell the specific weather of that place at the mentioned time. It can also tell the recipe of simple dishes. It can tell the address of a general location. It can solve mathematics problems. While she can solve questions of the level of class 9 or 10 standards, I am developing it to be more advance,” he added.

Elaborating over Shalu’s purpose, Patel said that while Sophia is just a social humanoid, he wanted to develop a machine that had knowledge as well. Therefore, unlike Sophia, Shalu has knowledge with a purpose to teach others.

“Sophia is a general talking robot. But I planned my robot to be a social and educational humanoid. Meaning, it can work as a teacher but can also perform general talk with humans. So she can give a general talk like Sophia but can also teach students. It has knowledge too of a range of subjects.”

Did Patel take anybody’s assistance in the project?

While Patel has told Republic World that the completion of ‘Shalu’ took him nearly three years, he also laid emphasis that he did it all on his own. Breaking the barriers of what many might think is essential to achieve the milestone, he developed the social and educational humanoid, without any laboratory or any technical help.

“It was all just me alone,” said Patel while adding that he did share the idea with his family who further motivated him to pursue his idea into reality. The computer science teacher, who also credited his teaching experience in making ‘Shalu’ said that even his family cooperated with him. Further explaining the thought process behind India’s own humanoid, Patel said that he was already inspired by Prime Minister Narendra Modi’s ‘Digital India’ mission and ‘Aatma Nirbhar’ mission.

He said, “From the start, I was already inspired by Prime Minister’s Digital India mission and Aatama Nirbhar Bharat. Therefore, I wanted to do something that reflects that the product is made at home. It is ours. I developed everything in my place. Even Shalu’s body and software”

No, in the conversation with RepublicWorld, Patel revealed that even though Shalu is equipped with a huge spectrum of qualities, “it is not complete.” The computer science teacher said presently, ‘Shalu’ is enough to show to the world that something has been readied after all these years but there’s a lot more work to be done despite the fact that most of what Patel had initially thought, has been achieved.

Patel said, “It took me three years to develop Shalu but it is still not complete. The process is still going on. It is just a prototype. Yes, I can say that it is enough to show what I had initially thought. Most of that is done. But ‘what I’m thinking that is done?’ then, ‘No’”

When did he work on ‘Shalu’?

Patel disclosed that he only found time to work on ‘Shalu’ after completing the day’s work and hence, only at night.

“I never found the time during the day because I am a teacher and most of my time is spent with my students. So all the time that gave towards developing ‘Shalu’ was at night. I used to sit at night after having dinner around 10 PM then used to sit till 2, 3  or 4 AM until I felt it was enough or I thought it would make it difficult to wake up the next day. Then I used to sleep. But always worked in my room at night.”

What’s more for ‘Shalu’ in the future?

Disclosing his future plans with Shalu, Patel said that he is planning a ‘Shalu 2.0’. However, since the future project that the computer science teacher is planning is going to expensive, he still has to find the power to facilitate the resources. “Presently Shalu is entirely made out of waste material, none of the body parts is 3D printed as seen in other developed robots. The face is made of plaster of Paris. The body is also made at home,” said Patel.