Recently, a video of a man playing violin in the streets of Kolkata had surfaced on social media. Now, the Kolkata Police have gifted the artist a new violin. 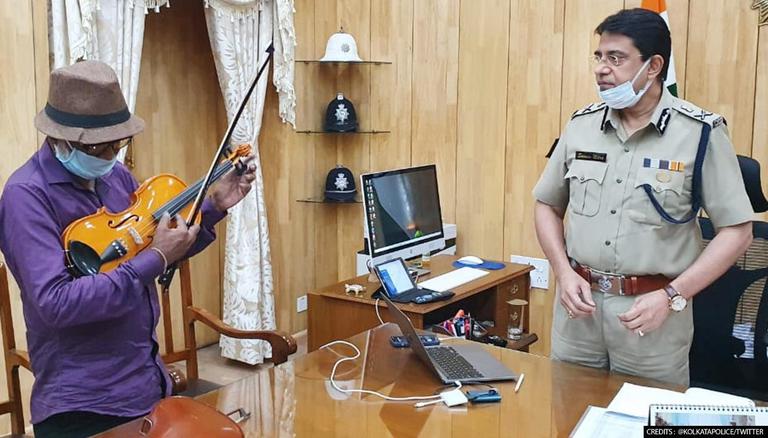 
Last month, a video of an elderly man playing the violin in the streets of Kolkata had surfaced on social media. The clip of the violinist named Bhagwan Mali had gone viral on the internet and he was appreciated by netizens for his talent. Now, in a heartwarming gesture, Kolkata Police have lauded the talented artist and has gifted him a violin.

Taking to Twitter, Kolkata Police shared two pictures that featured the Kolkata Police Commissioner and Bhagwan Mali holding a violin in his hands. The police in the post praised the artist for his talented skills. They pointed out that the artist was playing the violin in the city streets some weeks back. The police department mentioned that the Community Police Wing had last week helped the artist financially. Now, Commissioner of Police, Soumen Mitra has gifted Bhagwan Mali a new violin.

Meet Mr. Bhagwan Mali, who is a very talented musician.Few weeks ago, a video of him playing his violin in the city streets, had gone viral on Social Media.Last week, he was financially assisted by our Community Policing Wing. Today, @CPkolkata gifted him a new violin. pic.twitter.com/750lYhZX0x

Since shared, the post has garnered over 620 likes and several reactions. Netizens took to the comments section to praise the kind gesture of the police department. One user commented, "Fantastic This kind of things can make our society beautiful And congrats to Mr. Mali for such kind of gift from police family". Another user commented, "Good to see the human face of Kolkata Police! My Salute!". Another individual commented, "Really a great job done by KP. Thanks a lot."

READ | WATCH: A crocodile seen strolling in streets of Karnataka; rescued & sent back in river

Fantastic
This kind of things can make our society beautiful
And congrats to Mr. Mali for such kind of gift from police family

Good to see the human face of Kolkata Police!
My Salute!

Good attempt sir. Keep it up

Really a great job done by KP. Thanks a lot.

Recently, the video of violinist Bhagwan Mali playing a rendition of popular Hindi songs on a deserted street in the West Bengal capital had surfaced on social media. The melodies encompass Diwana Hua Baadal by Asha Bhosle and Mohammed Rafi, from the 1964 movie Kashmir ki Kali, followed by Ajeeb Dastan Hai Yeh by Lata Mangeshkar from the 1960 movie Dil Apna Aur Preet Parai amongst others. The clip also featured a female accomplice, possibly his wife, who was seen eagerly waiting for people.

READ | Small girl hailed as 'hero' as she alerts father after spotting fire in the house: Watch

This elderly man, who is playing the violin on the street of Kolkata, is an artist who is entertaining people during the lockdown.

It’s true that lockdown played a key role in containing the spread of the virus but it has also created enormous difficulties for the people. pic.twitter.com/ckO9ozeDcl