Thailand's Anna Sueangam-iam amazed viewers with her recycled dress made of pull-tabs of drink cans during the Miss Universe 2022 preliminary competition. 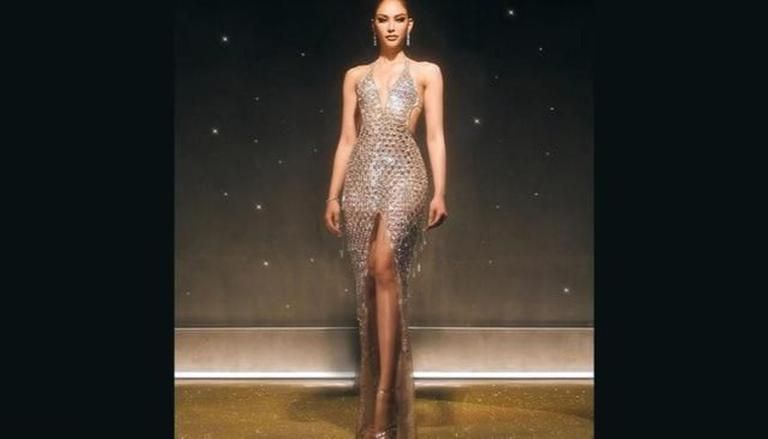 
Thailand's Anna Sueangam-iam amazed everyone on Thursday with her recycled dress made from the pull-tabs of drink cans during the Miss Universe 2022 preliminary competition.

It is also bedazzled with Swarovski diamonds called the "Hidden Precious Diamond Dress".

The gown holds even more crucial meaning as her father is a garbage collector and her mother is a street sweeper. Even after getting called “garbage beauty queen,” Miss Universe Thailand said, “It never stopped her from shining bright as a precious gem.”

Also, the “Hidden Precious Diamond Dress” was designed by the fashion brand Manirat.

She also said, "You must not get stuck with murky surroundings you were born into, but do believe you have the power to change your own life for the better.” Along with the post, the official handle of the Miss Universe also wrote quotes Anna stated.

It wrote, "Persistence, tenaciousness and optimism within her have led her to a great success in life. It is the result of being brought up by a father who is a garbage collector, street-sweeper mother, and a virtuous nun who was Anna’s great-grandmother. Although she was called by some as 'The garbage beauty queen,' that never stops her from shining bright as a precious gem."

It continued, "From her empowering life story, the message is conveyed through this 'Hidden Precious Diamond Dress'. Meticulously created from used aluminium pull-tabs of drink cans and Swarovki combined."

The gown of Thailand’s beauty has garnered compliments from a lot of social media users. “If Miss Thailand wins, I won’t complain,” a Twitter user said.

“Miss Ma’am, Miss Universe Thailand’s evening gown is made of pull can tabs as a homage to her garbage collector dad and street sweeper mom. Thailand is back in their A-game,” an online user wrote.

“Thai beauty queens really know how to serve with their costumes and gowns,” an online user commented. “THIS IS SO GENIUS HOLY,” another Twitter user wrote. “We love a conceptualized Queen! Let’s go Thailand,” a social media user cheered the delegate.

The coronation night for the Miss Universe will be conducted on Saturday, January 14 evening in New Orleans, Louisiana, USA.