A New York-based firm claims to be offering a “reverse financed internship” for a data analyst position, meaning that the interns will have to pay the company. 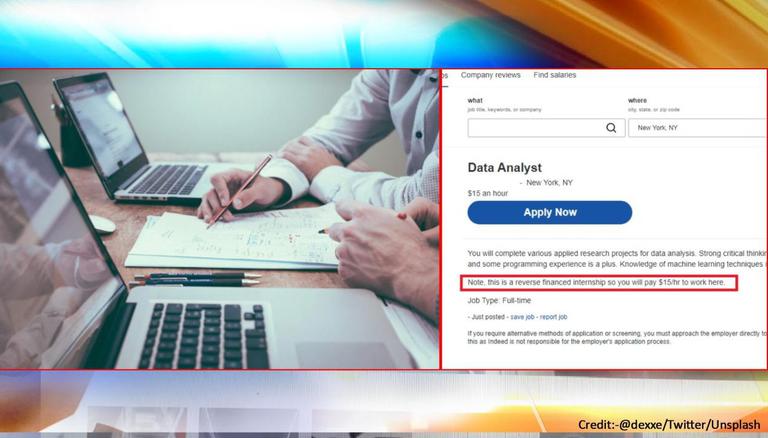 The company Eisele & Stern posted an ad seeking applicants for a "reverse financed internship" where interns are asked to pay $15 per hour to work for them.


An apparent prank job listing first spotted back in January 2020 has continued recirculating through social media platforms. The ad was posted on the job listing website Indeed.com and was attributed to the company Eisele & Stern in New York, US. According to the advertisement, the firm claims to be offering a “reverse financed internship” for a data analyst position, meaning that the interns will have to pay the company instead.

The description of the job profile read, “You will compete various applied research projects for data analysis. Strong critical thinking skills and some programming experience is a plus. Knowledge of machine learning techniques is a bonus”.

It added, “Note, this is a reverse financed internship so you will pay $15/hr to work here. Job type: Full-time”.

you've heard of unpaid internship but have you heard of reverse financed internships? pic.twitter.com/lrULKunC2M

The photograph of the listing has taken the internet by storm, including a Twitter post that has received over 258,000 likes and thousands of comments. However, it is imperative to note that no company by the name ‘Eisele & Stern’ appears in web searches. But despite being debunked, the meme has continued to find life on the internet, where a search under “reverse financed internship” produces several results with varying reach.

As the advertisement went viral, Indeed had said that it removed the ad and was further investigating. Meanwhile, several Twitter users were amused to see the posting. While one user wrote, “it's like companies are in some competition to see who can be the biggest exploiters,” another said, “Yes, trainee solicitors used to pay their employer for the "training". Although I'm pretty sure that stopped half a century ago”.

I would do a reverse data analysis for them. If I'm paying $15/hr to them, I'll be doing stuff like randomly deleting their files. My mottos will be "I hope that wasn't important! " and "I hope you have backup copies!" I'm getting my mf money's worth.

y’all it’s fake. Please google things that are too dystopian to be entirely believable.

Insanity. The fact that people don't show compassion to millenials struggle is evidence that boomers do not care about having a happy healthy human experience. What the hell were those people taught? The suffering they expect us to put up with is baffling. Paying to work? What?

For everyone saying it's nothing wrong with paying for an internship pic.twitter.com/Utc0L6DUKv

They charge I think because they are BIG and so many people want to be part of them. It is a way to discourage the many applicants.