Spiderman Is That You?: Picture Of Chameleon Looking Like The Superhero Goes Viral

An image has surfaced on the internet which shows a chameleon looking like a spiderman. The picture has grabbed the attention of social media users 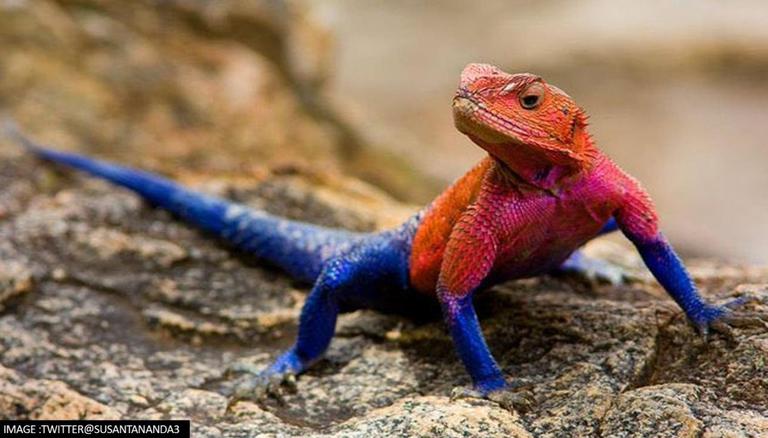 
Spiderman is a popular superhero character across the world. However, this time another form of spiderman has gone viral on social media. An image has surfaced on the internet which shows a chameleon resembling spiderman. The animal not only possesses the colour of a spiderman's suit, but it is also the exact shade of the colour which has caught the attention of social media users.

The image has been shared by IFS officer Susanta Nanda on Twitter alongside the caption, “Spider-Man in real life…DYN that the Mwanza flat-headed rock agama, referred to sometimes as Spider-Man agama, climbs up vertical walls like the reel life spider man.” The picture shows a chameleon whose half of the body is red, while the other half is blue coloured. In the picture, the chameleon is looking like a spiderman. Take a look at the post:

Since being posted on the microblogging site, the picture has garnered over 1,400 likes and 170 Retweets. The post has attracted the attention of users who could not stop themselves from reacting to the post. One user commented, “Loki's animal version : crocodile Spiderman's animal version : chameleon Seems that Multiverse has really opened.” Another netizen commented, “A Spideyleon!! Marvel guys..ur next idea is here!!”. Another Twitter user wrote, “One of the most beautiful creature ever seen.” Check out some netizens reactions:

Earlier in October, a video of a colourful chameleon spotted in California had surfaced on the internet.  The video was shared by ViralHog on YouTube. In the video, green and red chameleon can be seen in a tray. According to Viralhog caption, the colourful chameleon was a "Panther Chameleon". The "Panther Chameleon" is bright coloured and looks "more like a bag of skittles candy than a reptile" and is native only to Madagascar. Watch the video here: