Woman Walks Her Husband On A Leash To Get Around, Fined For Flouting COVID-19 Curfew

Officers slapped $3,000 in fines on the couple for violating the COVID-19 protocol after woman was seen walking leash clad husband in downtown area past 8 pm.

A Canadian couple was fined $1,500 (£868) each after they tried to flout the COVID-19 curfew as the woman walked her ‘husband’ on the leash. Canada’s Quebec City had imposed the coronavirus curfew effective 8 pm to 5 am in new drastic measures to curb the surge of new variant infections. In an exception to the rule, the residents were allowed to walk their dogs and other leashed pets. According to Canada’s CTV News,  Quebec’s police caught the leash-clad husband walking alongside his wife, the duo skirted the cover rule.

Sherbrooke police came across a lady and her husband who were out for a walk near the downtown area past the 8 pm curfew. The man was wearing a leash around his neck, as the couple strolled despite restrictions, the department announced in a statement. The lady according to the local sources was questioned by the officers and she responded, that she was walking her dog on the leash. Furthermore, the couple argued with the police that they were allowed to walk their dogs after curfew.

The officers slapped total $3,000 in fines on the couple for violating the COVID-19 curfew and posing risks of spread of injection. Effective January 11, Quebec went under a curfew from 8 pm to 5 am and those flouting the rules were liable to a fine up to $1,000 to $6,000. Premier Francois Legault called the incident “shocking” in the wake of rising infection rates across the country.

Read: US To Host Canada, Brazil And Japan For 2021 SheBelieves Cup 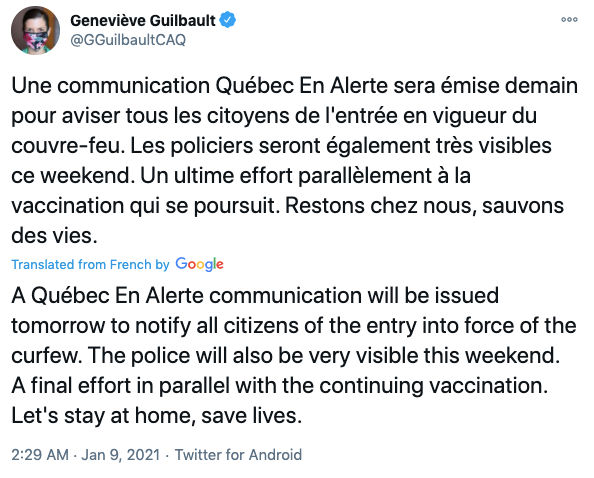 Addressing the state press conference, the premier said, “The police are important allies in the fight against the virus.” He added,  “I need the police and Quebec needs the police to be able to succeed with this shock treatment during the next four weeks of the curfew.” Quebec’s administration also announced that it will maintain the official record of the people that were caught violating the restrictions after a stringent curfew was implemented Saturday night. As per the law, people in Canada were allowed to walk dogs on leash only within a kilometer of their homes after 20:00, the police department informed.