Andhra Pradesh: 5 Out Of 6 Students Rescued From Drowning By NDRF At Ferry Ghat; Search On

Five out of six students were rescued from drowning by the National Disaster Response Force (NDRF) in Andhra Pradesh's NTR district on August 19. 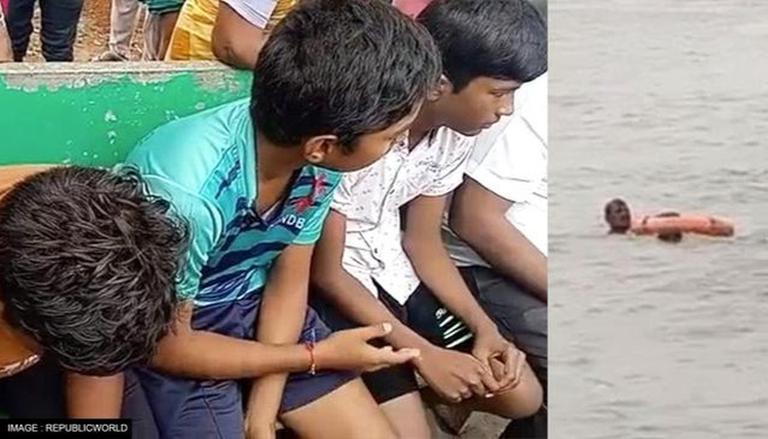 
Five out of six boys who had gone to swim at a ferry point near Pavitra Sangham Ghat in Ibrahimpatnam Mandal of Andhra Pradesh's NTR district on August 18, were rescued from drowning by a National Disaster Response Force (NDRF) team on Friday, August 19. As of now, searches are on to find one more student, who is feared to have drowned.

All the six students were stuck in the ferry after they were dragged into the current at the Krishna river near Ibrahimpatnam Mandal. As per reports, the students were studying at the local Zilla Parishad High School, and the missing student has been identified as Lokesh.

This comes as the flood level in river Godavari in Andhra Pradesh has been rising steadily since Wednesday again after showing a falling trend, following heavy rains in the upper areas. Due to this, the instant inflow and outflow at Sir Arthur Cotton Barrage at Dowaleswaram near Rajamahendravaram has risen to 14.42 lakh cusecs (cubic foot of water flow per second).

At Bhadrachalam in neighbouring Telangana, the water level in Godavari was recorded at about 15 lakh cusecs, crossing the third danger mark at a level of 54.5 feet. The State Disaster Management Authority said that the second warning signal remained in place at the Cotton Barrage even as three teams each of the NDRF and the SDRF were positioned in the flood-hit districts of Alluri Sitarama Raju, B R Ambedkar Konaseema and Eluru for relief operations.The State government is yet to prepare a detailed estimate of the damage caused by the flood.