The Indian Railways on Thursday has cancelled all tickets booked to travel on or before June 30th, 2020. All special trains and Shramik Special train will ply

The Indian Railways on Thursday announced that it has cancelled all tickets booked for travel on or before June 30th, 2020. According to an official statement, refunds will be given for all tickets booked until June 30. Only special trains and Shramik Special train will, however, ply as usual. 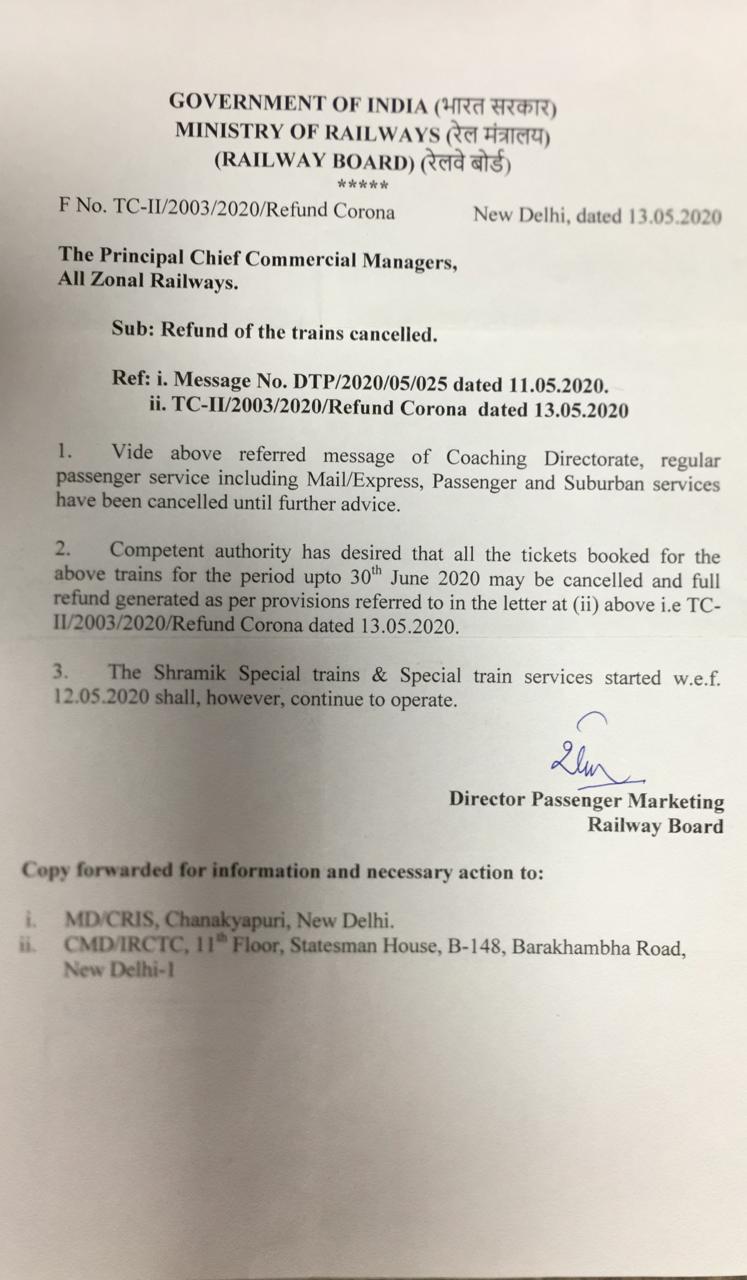 Meanwhile, in an indication that it might soon start mail, express as well as chair car services, the Railway Board on Wednesday issued an order introducing the provision of waiting list tickets not only for its operational special trains but for more such trains "to be notified in due course".

While in present special trains only confirmed tickets are booked, the waitlisted tickets will now be available with bookings opening on May 15 for journeys beginning from May 22. The railways have, however, capped the waiting list on these trains -- up to 100 for AC 3 Tier, 50 for AC 2 Tier, 200 for Sleeper Class, 100 for Chair Cars and 20 each for First AC and Executive Class.

READ | Railways to start waiting lists for special trains from May 22; likely to run more trains

The order from the railway board to zones indicates that the railways is planning to run mixed services instead of the present all air-conditioned trains. This also means that it could begin services to smaller towns along with the major cities that its Rajdhani specials are catering to now.

Neither Tatkal or Premium Tatkal Quota nor senior citizen quota will be available on these trains. Reservation against Cancellation (RAC) tickets will also not be allowed. No waiting ticket holder will be allowed to travel, officials said, adding that they will get a full refund. So far there is no order from the railways to begin more services.

The Indian Railways resumed passenger train operations from May 12, initially with 15 pairs of trains, weeks after these were suspended due to the lockdown.

PEOPLE HAVE PLEDGED SO FAR
LATEST NEWS
View all
16 hours ago
Flight attendants get back to work as domestic flights resume
7 hours ago
Cyclone amphan: here's how you can donate to west bengal state emergency relief fund
13 hours ago
Watch: staff conducts sanitisation inside delhi-bhubaneswar flight after passengers exit
10 hours ago
India's covid doubling rate shifts from 17 to 14 days as states scramble to contain crisis
13 hours ago
'we'll come through this': usha uthup narrates cyclone amphan's devastation; adds appeals