A delegation of students has written a letter to the CJI requesting them to take cognizance of the Aarey issue immediately, as MMRCL continues felling trees

While the Bombay High Court has refused to stay the mass felling of trees at Aarey, protestors, on Sunday, have decided to knock at the Chief Justice of India Ranjan Gogoi. A delegation of students has written a letter to the CJI requesting them to take cognizance of the Aarey issue immediately. The Supreme Court is currently on a Dussehra vacation till October 13. Highlighting the emergency of the issue, the students have appealed to the Supreme Court to intervene as the Mumbai Metro Rail Corporation (MMRCL) continues to fell trees in Aarey.

WATCH | Aarey Protest: 29 protesters who were granted bail may not leave jail

The letter points out the gravity of the issue stating, "By the time an appeal is filed in the Hon'ble Supreme Court we feel that part of Aarey will be cleared with all trees axed leading to irrevocable loss." The students had also stated how their fellow protestors had been arrested by the police for conducting a peaceful protest in the Aarey area on Saturday. They also notified the CJI that MMRCL had already felled 1500 trees in Aarey, inspite of massive protests. They have stated their constitutional right to approach the SC in this matter. They hope that the SC would grant them relief by saving the 'lungs of Mumbai' 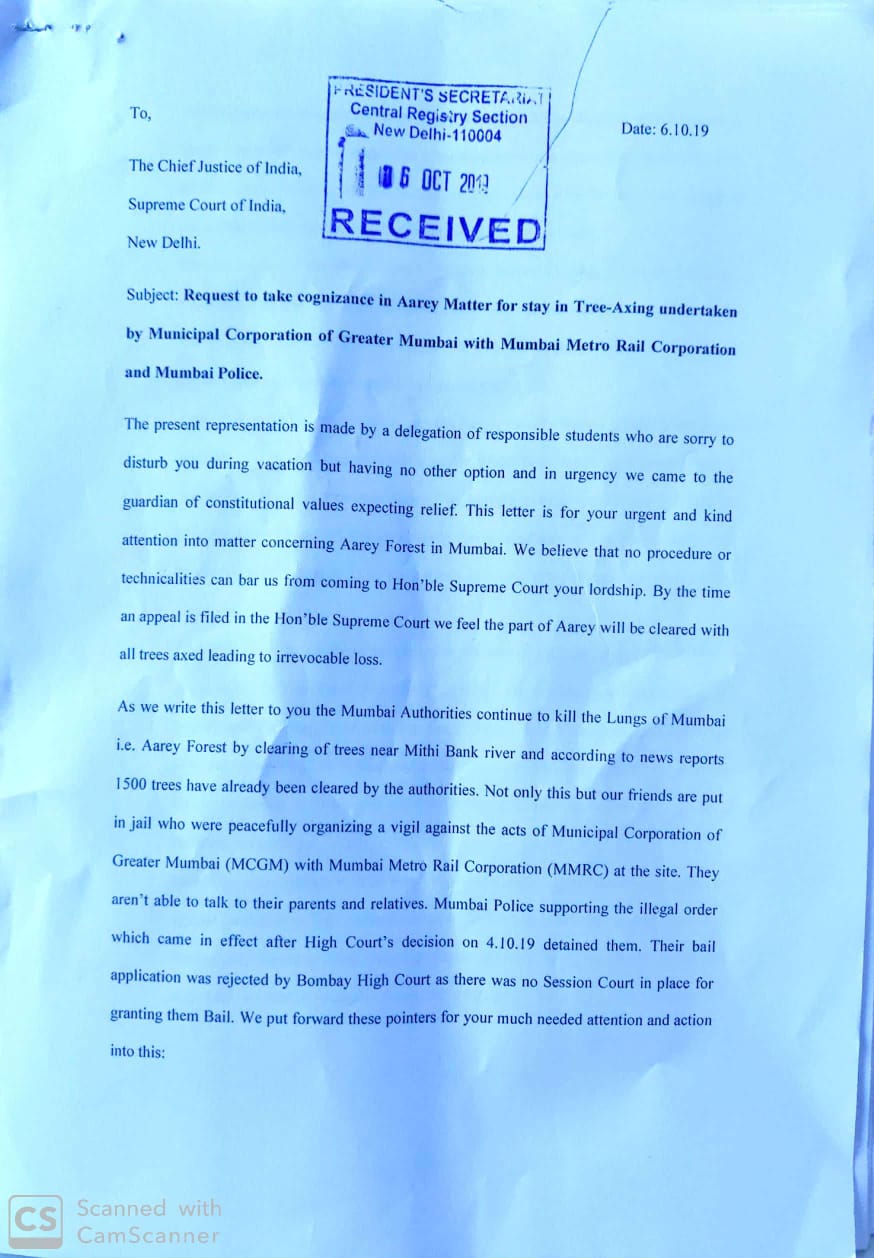 Aarey protestors get bail, but remain in jail

Earlier in the day, the 29 protestors who were arrested on Saturday, have been granted bail by Additional sessions court judge H C Shende of the holiday court on Sunday. The protestors had been booked under various sections of the Indian Penal Code for disturbing public order and obstructing government officials from performing their duties, according to ANI. However, the protesters are unlikely to walk out of the Thane jail, on Sunday, pending completion of the legal procedure and other formalities, according to PTI. Earlier on Saturday, the Bombay High Court has rejected a fresh plea of activists seeking a stay on tree cutting at Aarey. It had also granted the Mumbai Police judicial custody of the 29 Aarey protestors.

WATCH | Centre's first response to protests against tree-felling in Aarey

On Friday night, the protest against the mass tree-cutting of trees in the Aarey area took an ugly turn when authorities from Mumbai Metro Rail Corporation Limited (MMRCL) allegedly started cutting trees in the area. This move was following Bombay High Court's dismissal of all petitions challenging the action of the Tree Authority of the Brihanmumbai Municipal Corporation (BMC) in allowing the MMRCL to cut down 2,656 trees in the area. Police imposed Section 144 near the metro-rail project site on Saturday morning. Following the imposition, Mumbai Police has stopped the entry of people from Marol Maroshi Road. Sources from the location informed that despite prohibitory orders, protestors refuse to move from the place and Police have resorted to lathi charge.