CM Arvind-Kejriwal led Delhi Govt has imposed "Special Corona Fees" of 70% tax on Maximum Retail Price (MRP) of liquor, which will be applicable from Tuesday.

Chief Minister Arvind-Kejriwal led Delhi Government has imposed "Special Corona Fees" of 70% tax on the Maximum Retail Price (MRP) of the liquor, which will be applicable from Tuesday morning. The move will boost the government revenue, which has been hit hard due to the Coronavirus-forced lockdown, but there will be a steep rise in the prices of retails liquor bottle.

In a late-night notification, the Finance Department of the Delhi government said, "70 per cent of the maximum retail price (will be levied) on all categories of liquor sold through retail licensees for consumption..." 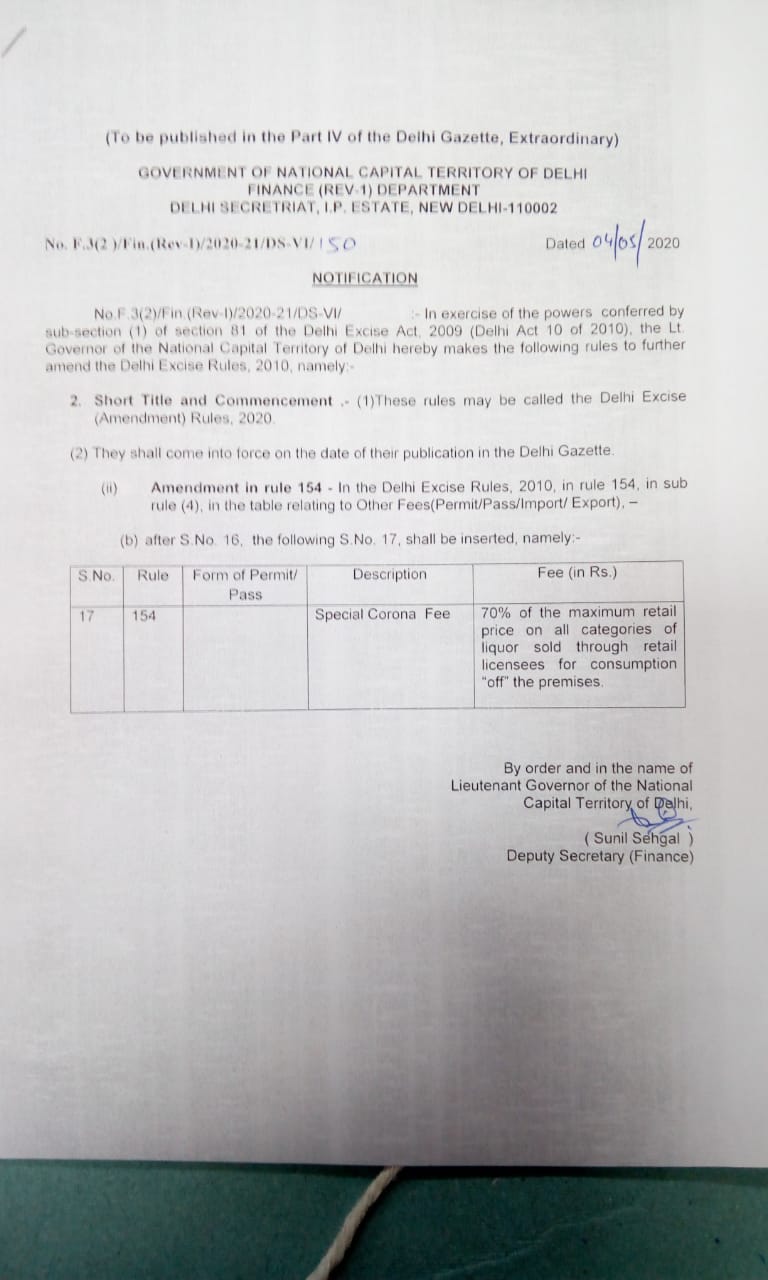 Meanwhile, Delhi Excise Commissioner has written to Delhi Police Commissioner stating, "Directions may be conveyed to field functionaries that liquor vends of four government corporations as per list finalised by them in pursuance to order of this department should be allowed to function from 9 AM to 6:30 PM."

Many Delhi BJP leaders on Monday asked the Aam Aadmi Party (AAP) government to reconsider its decision on the opening of liquor shops in the national capital, saying it may lead to a spike in Covid-19 cases. Leader of Opposition in Delhi Assembly, Ramvir Singh Bidhuri criticised the Delhi government's decision to open liquor shops, claiming it can increase Coronavirus positive cases by up to 10%.

The AAP has allowed opening of 150 state-run liquor shops outside the Coronavirus containment zones in the national capital. On Monday, Chief Minister Arvind Kejriwal said all relaxations in the areas where people violate social-distancing and other health norms will be withdrawn.

The Chief Minister's stern message came amid reports of people flouting social-distancing norms at liquor shops in many areas of the city after authorities allowed all activities permitted by the Central government under lockdown 3.0. All liquor shops in the eastern range were also shut for violation of the norms, said Delhi Police. The Delhi government on Sunday allowed shops selling liquor, tobacco, etc. to operate in the national capital during the extended lockdown period from May 4 onwards.