The Madhya Pradesh Congress on Friday slammed the policies of Narendra Modi-led BJP government after the RBI imposed a moratorium on private lender Yes Bank.

The Madhya Pradesh Congress on Friday slammed the Narendra Modi-led BJP government after the RBI imposed a moratorium on Yes Bank. The Reserve Bank of India (RBI) on Thursday also appointed former SBI CFO Prashant Kumar as administrator for Yes Bank, as per a statement released by the body.

Taking to Twitter, MP Congress cited the ban by RBI on withdrawal of more than ₹ 50,000 and wrote, "you will deposit your money in the bank, then you will not let the money be withdrawn from the bank.". This statement could be sarcastically intuned with the BJP government's constant push for opening bank accounts ever since the party came in power and the demonetization that was imposed later.

"The tweet in Hindi read as, "Now 'No' to the customers of Yes Bank: Yes Bank is also sinking due to the wrong policies of Modi Ji. RBI has banned withdrawal of more than ₹ 50,000. Understand Chronology. First, you will deposit your money in the bank, then you will not let the money be withdrawn from the bank." 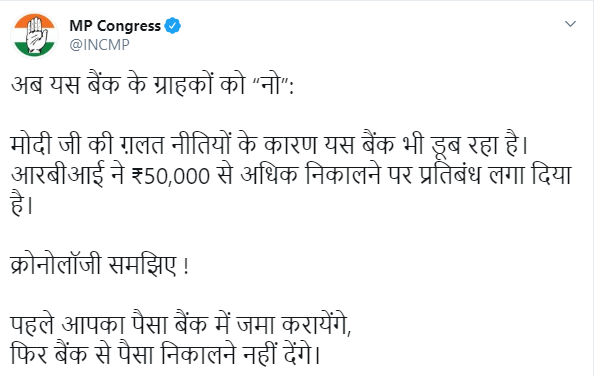 The RBI imposed a moratorium on the troubled lender capping its withdrawals at Rs 50,000. The RBI also stated that there was no need to 'panic' as the depositors' interest will be 'fully protected'.

"The Reserve Bank came to the conclusion that in the absence of a credible revival plan, and in public interest and the interest of the bank’s depositors, it had no alternative but to apply to the Central Government for imposing a moratorium under section 45 of the Banking Regulation Act, 1949," read the press release by RBI

Earlier, sources reported that a consortium of lenders, led by State Bank of India, will acquire a controlling stake in Yes Bank. It was also stated that the government had given a go-ahead to this plan. The bank's capital buffers have come down due to non-performing assets. Yes, Bank, which is grappling with bad loans, is looking to raise fresh capital but the plans are facing uncertainties.

Yes Bank has been passing through a tumultuous period ever since the Reserve Bank, in August 2018, asked the then chief executive Rana Kapoor to leave by January 31, 2019, amid concerns on governance and loan practices.