The Director of IIT Delhi, V Ramgopal Rao, has pointed out the mistakes in the ‘The Times Higher Education' – World University Ranking’ methodology and ranking.

Talking about the contribution of India’s education system in the global space, the Director of Indian Institute of Technology, Delhi, V Ramgopal Rao, in a Facebook post, has pointed out the mistakes in the ‘The Times Higher Education' – World University Ranking’ methodology. He reiterated that it uses 'perception-based parameters' instead of focusing on 'Research Impact' which causes the Indian institutions to rank low on their list. According to Ramgopal Rao, if the 'fundamental' of a university or institution is strong, the rankings should follow them. He mentioned in his post the four reasons why he does not believe or abide by THE’s ranking system and methodology.

Director Ramgopal Rao in his post also mentioned a difference between Quacquarelli Symonds rankings and The Times Higher Education rankings. He said, “That time of the year again about University rankings and, alas, the same question again: Why no Indian institution is in the top 100 according to QS (and top 300 according to THE)? Everyone becomes an expert on our institutions at this time of the year. If you care to know the facts, please read on.” He then went on to give four reasons to the rhetoric question he put forth.

I am not commenting on IIT Delhi improving its ranking by about 100 places in THE rankings released today, as I believe it doesn't represent the true ranking of our institutions.

1. In three of the ranking parameters such as International students, International faculty and Faculty-student ratio, our institutions score close to Zero points. To be ranked globally, we need to internationalize our campuses.

2. Contrary to popular perception, on Research Impact scores, our top institutions indeed score very well. For example, IIT Delhi was ranked 39 in the world in 2018 on Research Impact score (total citations divided by the number of faculty) in QS ranking. We recruited a lot more faculty in the last two years, and it has gone to 50's now. Once the new faculty become productive, it should rise again.

If you rank world universities on just the "Research Impact" scores, many of our top Indian institutions (read IITs and IISc) will be in the top 100.

3. We don't score well on perception-based parameters on a global scale. Again because of the inward-looking nature of our institutions and cultural issues. This is also changing now.

4. 50% of the scores used for ranking are based on perception. QS is at least a lot more transparent with respect to how they generate perception-based scores. THE is a blackbox. Many of us have stopped caring about THE rankings.

Director Rao also gave a brief about the makings of a great institution. He said, “In my humble opinion, institutions become great by positively impacting the ecosystem around it by imparting the highest quality education and training to the students who go through its portals. If Delhi NCR has the highest number of tech startups/Unicorns in India, IIT Delhi has played a role in it. If 14 of the 24 Unicorns created by Indians are by the alumni of one single institution IIT Delhi, IIT Delhi is surely doing many things right. If the fundamentals are strong in any institution, the rankings will follow. I am positive and hopeful about the future. Let's not create negativity in the society by harping on some numbers, which aren't even put together with enough care and thought.”

Read: Delhi University elections for four positions to be held on Thursday

About Rankings. If you care to know the facts about International rankings and why not a single Indian institution is in the top 100 in the world rankings, please read my post on this. Things are changing. https://t.co/w8stdbdPc6

THE on its website publishes the methodology that it applies to rank universities every year. The rankings of 2020 will include about 1,400 universities across 92 countries. THE will be using 13 carefully calibrated performance indicators that measure an institution’s performance across teaching, research, knowledge transfer and international outlook. The performance indicators, according to THE website, are grouped into five areas: Teaching (the learning environment); Research (volume, income and reputation); Citations (research influence); International outlook (staff, students and research); and Industry Income (knowledge transfer). The following table shows the share of these performance indicators. 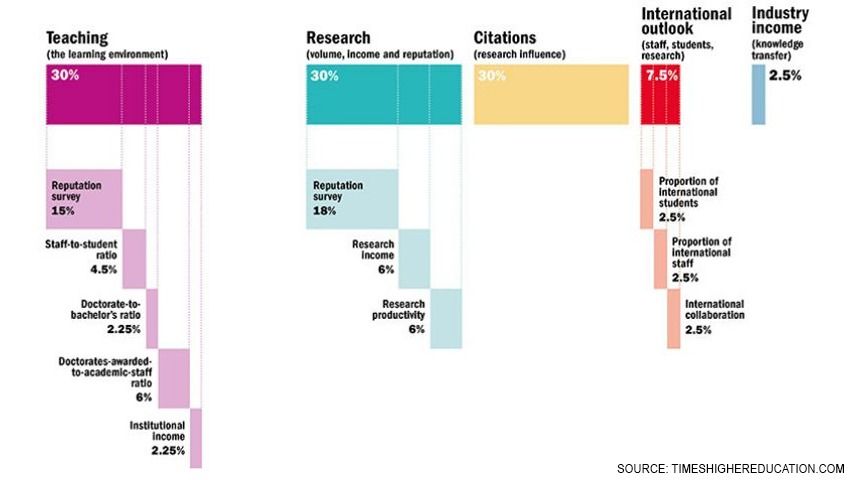 WE RECOMMEND
10 months ago
Ranbir Kapoor Film Brahmastra to be a Trilogy; based on Meluha?
10 months ago
It was intimidating directing Farhan Akhtar, says Shonali Bose
10 months ago
Saaho director Sujeeth: "Being treated as if I have committed a crime"
11 months ago
Saaho: Director refutes plagiarism claims, hits back at Jerome Salle
11 months ago
'Dream Girl': Director Raaj Shaandilyaa refutes plagiarism accusations
LATEST NEWS
View all
1 hour ago
Rajasthan PTET 2020 exams postponed until further notice
4 hours ago
JEE 2020: Jee advanced not to be held in foreign countries this year
6 hours ago
UPSC IAS: Sweety Sehrawat secures AIR 187 in UPSC results, fulfills father's dream