National Testing Agency (NTA), on Thursday, issued a press release pointing out that no state apart from Gujarat and Maharashtra had requested a language option

Responding to West Bengal Chief Minister Mamata Banerjee's criticism on the Joint Entrance Exam (JEE) having only a Gujarati language option, the National Testing Agency (NTA), on Thursday, issued a press release pointing out that no state apart from Gujarat and Maharashtra had approached NTA to provide the JEE (Main) question paper in any other Indian National Language. The central testing body highlighted that only Gujarat and Maharashtra had agreed to admit their candidates in State Engineering Colleges through JEE Main. The NTA's statement exposes Banerjee's claims that the Centre intends to malign ‘all regions and regional languages’.

The press release explained that in 2013, only Gujarat had agreed to admit their candidates in State Engineering Colleges through JEE (Main) when requested by NTA, after which the Gujarati option became available. It added that Maharashtra too followed suit in 2014 and had requested to provide the question paper in Marathi and Urdu. But in 2016, both states withdrew the admission option after which Marathi and Urdu option was discontinued. The Gujarati option was continued on the state's request, stated the NTA.

Here is the press release: 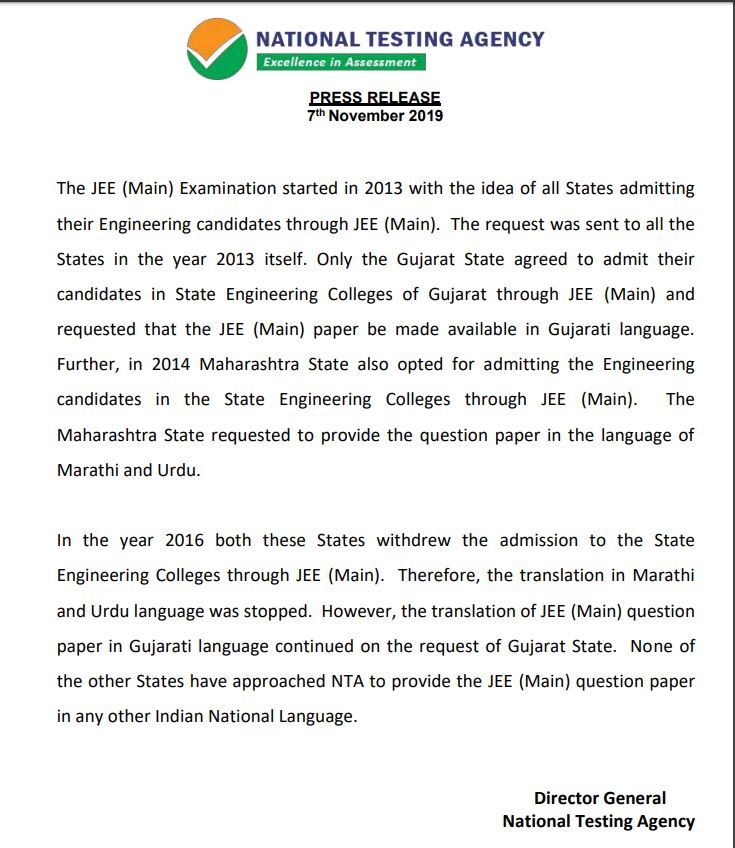 Earlier on Wednesday, Banerjee had criticised the Centre for its lack of regional language options for candidates appearing for the JEE tweeting 'maligning all regions and regional languages is the intention of the government at the centre'. She added that only Gujarati had been added recently, claiming 'Why was this injustice being meted?', demanding a Bengali option too. She also warned that strong protests will happen as 'people's sentiments will be hurt otherwise'.

Joint Entrance Exams so long were conducted in English and Hindi languages. Surprisingly, now only Gujarati language has been added.
Such a step is not at all praiseworthy. (2/4)

NTA to drop Gujarati option in 2021

Reports state that the newly formed National Testing Agency took over from the CBSE the responsibility to hold the majority of exams, including the competitive JEE in 2019. Centre had reportedly stated that barring the board examinations (class X and XII), rest of the exams will be taken over the NTA in a phased manner. Reports further state that while Gujarati has been continued on the state's request, it will be dropped from 2021.

PEOPLE HAVE PLEDGED SO FAR
Why only Gujarati? Conduct JEE in all regional laguages: Bengal CM
Bollywood actors who made their way to the Gujarati film industry
Must-have: Here is a list of best Gujarati dishes one should try out
5 Bollywood singers who have sung in different regional languages
The best type of Gurajati Sarees to try for Diwali 2019
​​​​​​​PM Modi recommends 'tech-free hour' to avoid getting distracted by technology
How to download Navy MR Admit Card? Step-wise details here
UPSC 2019 Mains PT interview schedule out | Details here
DO NOT MISS
KISHOR'S DARE TO NITISH
MAHARASHTRA MULLS NATIONAL ANTHEM
'TWO MOST HUMBLE BUSINESS MEN'
PRASHANT KISHOR REFUSES TO COMMENT
ROHIT AFTER WINNING SERIES
LIFE INSURANCE FOR NRI IN INDIA