Savitribai Phule was India's first feminist icon and a fierce social reformer. Here are some interesting facts about her on her death anniversary.

India’s feminist icon Savitribai Phule was one of the key figures leading the social reform movement in Maharashtra in the 19th century. With the unwavering support of her husband Jyotirao Phule, Savitribai became India’s first teacher and the pair opened India’s first girl’s school in Pune, at Bhide Wada in 1848. All her life Savitribai fought against casteism and patriarchy. Not only was she an educationist but also a poetess who wrote hard-hitting verses against discrimination and caste atrocities. Here are some interesting facts about India’s female icon on her death anniversary.

Who was Savitribai Phule?

Savitribai was a social reformer from Maharashtra who is widely regarded as India’s first female teacher. According to TribuneIndia.com, born in 1831 in the village of Naigaon in Satara District, Savitribai was the eldest daughter of Lakshmi and Khandoji Patil, who belonged to the mali community. Savitri bai was married to Jyotiba Phule at the early age of 10. Jyotiba was 13 at the time. Although the pair never had any children of their own they adopted Yashwant Rao a son born to a brahmin widow.

At the time of her marriage Savitribai was illiterate but Jyotiba who had gotten many opportunities of education, soon started teaching her at home. After completing her primary education, under the guidance of Jyotirao, she was taught by Jyotiba’s friends Sakharam Yeshwant Paranjape and Keshav Shivra, Bhavalkar for her further education. She then enrolled herself on a teacher’s training programme in Ahmednagar. She soon became India's first female teacher. When Jyotiba and Savitribai started their first girls school in 1848, they would initially offer a stipend to students to discourage them from dropping out and encouraging them to complete their education. However, their work was met with much resistance from their local community who still had conservative views. The report in TribuneIndia states that Savitribai would often carry an extra saree to school where she taught because she was often pelted with stone, dung and verbal abuse on her way to her workplace, the school where she taught.

Facing opposition from the Brahmin Community

One of the major reasons that brahmins were upset with her work is that they were providing education to the Shudra community which had been denied education for years. The couple was also evicted from their home by Jyotiba’s father because educating girls and shudra’s was considered a sin as per Brahmanical texts. Aside from education, the couple also worked for uplifting the lives of widows and campaigned against the practice of tonsuring women’s heads at the head of their husbands. 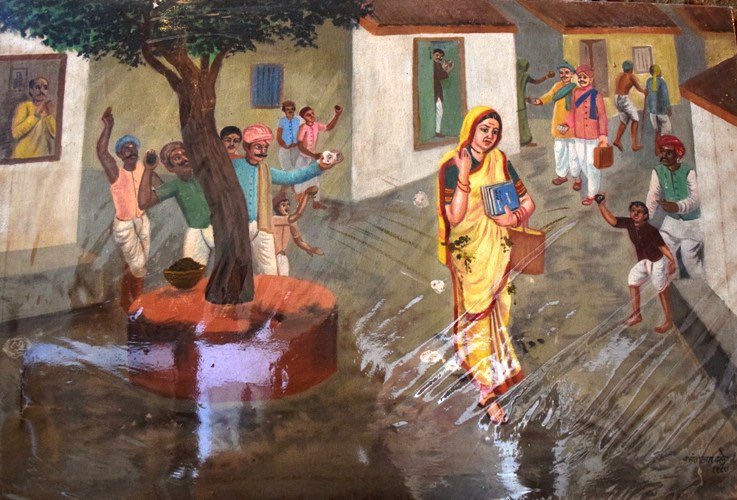 Savitribai opened a care hub for pregnant rape victims to support them in the delivery of their babies. She also installed a well in her own house to help the shudra community, who were considered untouchables at the time to fetch water from. Before her death due to the Bubonic plague in 1897, Savitribai opened the Satyashodhak Samaj along with her husband to eliminate the menace of untouchability. Today, March 10, 2021, is Savitribai's 123rd death anniversary.