Unacademy, an Indian online learning platform based in Bangalore, came under the scanner of social media after its alleged question paper went viral 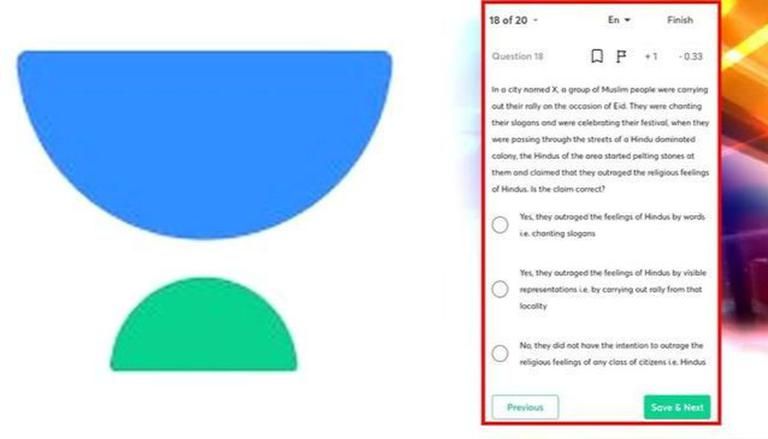 
Online learning platform Unacademy came under the scanner of social media after its alleged question paper in an online assignment on the IPC (Indian Penal Code) went viral. The purported question, which is being shared widely, says 'A group of Muslim people were carrying out their rally on the occasion of Eid. They were chanting their slogans and were celebrating their festival when they were passing through the streets of a Hindu-dominated colony, the Hindus of the area started pelting stones and claimed that they outraged the religious feelings of Hindus. Is the claim correct?' Notably, the viral question paper also shows that it has given the students three choices to give their answers.

Following this, people on Twitter were outraged and slammed Unacademy for its communal question in an assignment. Some slammed the online learning platform for targeting and naming communities and sought clarification.

This screenshot is allegedly from 1 of the tests conducted on the app of @unacademy
This question says that H!ndus started pelting stones on Musl!ms
U can be booked under Section 295A of IPC for the malicious intention of outraging the religious feelings
Kindly clarify#Unacademy pic.twitter.com/jwdxxeghWQ

I was thinking #Unacademy was a good coaching area even I heard bad about it but this had brought me here that it's just un-academy, it's not an academy it can't teach any good and it's showing it now. https://t.co/LTul4nSZBE

Why #Unacademy is spreading hatred among Hindus and Muslims? Is this the way to teach secularism and brotherhood to students? Such questions are being asked in Law Exams where a religion is put in bad light. pic.twitter.com/mipRiUsYXm

Great
you are meant to provide education but you guys are imparting an education where people one religion will start hating the people of other religion!!
Good job in creating a rift!!🙄🙄#Unacademy

'Unacademy' is an Indian online learning platform, based in Bangalore. Originally created as a YouTube channel in 2010 by Gaurav Munjal,  the company was founded in 2015 by Munjal, Roman Saini, and Hemesh Singh. As per the company's official website, Unacademy became the biggest Live Learning platform with 200k plus daily active users in 2018.  Unacademy lessons are in the form of Live Classes both free and via subscription.