In a major move, Ajit Doval has been reappointed and will continue in his position as the National Security Adviser (NSA) for the next five years, Furthermore, Doval has been upgraded to cabinet rank in the Modi Cabinet 2.0 along with the extension.

In a major move, Ajit Doval has been reappointed and will continue in his position as the National Security Adviser (NSA) for the next five years, Furthermore, Doval has been elevated to cabinet rank in the Modi Cabinet 2.0 along with the extension.

A notice of the Government of India dated June 2, has been accessed by Republic TV on Monday, stating that the Appointments Committee of the Cabinet approved the appointment of Ajit Doval as the National Security Advisor with effect from May 31.

"His appointment will be co-termius with the term of Prime Minister or until further orders, whichever is earlier," the notice reads. It further stated that during the term of his office, Doval will be assigned the rank of Cabinet Minister in the Table of Precedence. 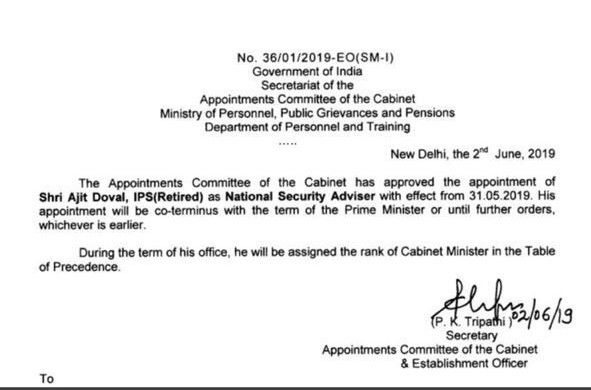 In the first Modi government, Doval was appointed as India's fifth National Security Advisor (NSA) on May 30, 2014, in the rank of Minister of State. He has been widely credited for the doctrinal shift in Indian national security policy in relation to Pakistan, especially in terms of the 2016 Surgical Strikes and 2019 Balakot Airstrike. He serves as the Chairman of the Strategic Policy Group (SPG), which is the first tier of a three-tier structure at the National Security Council and forms the nucleus of its decision-making apparatus. He was appointed to the position in October 2018.

Doval, a highly decorated IPS officer of Kerala Cadre, retired as Director Intelligence Bureau in 2005 and is popular for his many interesting and daring stories during his stint with the internal intelligence agency.

He also drew praise for his role during the 73-day stand-off between India and China at Doklam -- situated at a tri-junction between India, China and Myanmar, as per officials.

After a few years in uniform, he had worked as an intelligence officer for over 33 years during which he had served in the Northeast, Jammu and Kashmir and Punjab.

Prime Minister Narendra Modi took oath to office on May 30, along with 57 other ministers in the Cabinet. The Cabinet portfolios were announced on May 31, with BJP chief Amit Shah appointed as the Home Minister, along with Rajnath Singh being given the Defence Ministry in the Modi government 2.0. Nirmala Sitharaman has been assigned the Ministry of Finance in the second term.

PEOPLE HAVE PLEDGED SO FAR
Facebook wants to prevent revenge porn from spreading on its platform but doesn't want to notify victims about it
Priyanka Chopra: "I would love to run for Prime Minister of India and Nick to run for president"
Trove of 1,800 exploding stars discovered
J P Nadda on two-day visit to Himachal Pradesh from Thursday
Babul Supriyo inaugurates restaurant on wheels developed by refurbishing old train coaches
With Jared Kushner in tow, Ivanka Trump thanks India with ‘Taj Mahal’ in the backdrop
'Considering resolution against NRC, no issue with NPR', says Tamil Nadu CM Palaniswami
Delhi violence: US, Russia ask nationals to exercise caution, avoid affected areas
DO NOT MISS
NADELLA'S RESPONSE TO FAV CRICKETER
'NEHRU WAS ENVIOUS OF AMBEDKAR'
DHONI'S NET SESSION
MALDIVES THANKS INDIA ON EVACUATION
INSPIRED OR COPIED?
CAT'S REACTION AMUSES TWITTER