Rescue operations remained underway overnight following the Amarnath cloudburst incident in Jammu and Kashmir, while the yatra is expected to resume soon. 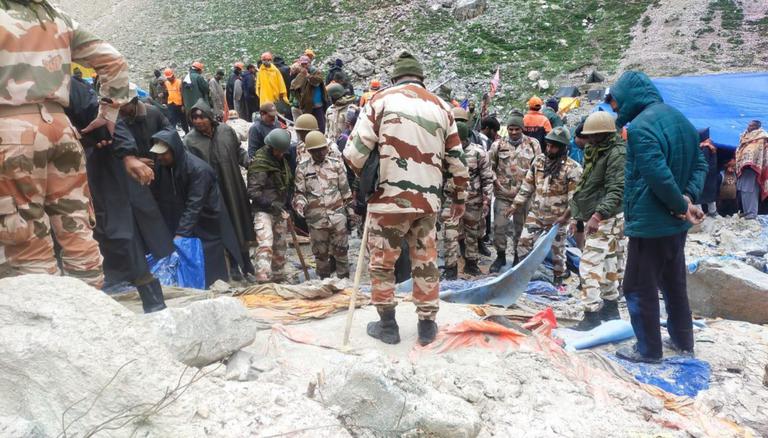 
As rescue operations near Amarnath cave shrine continued overnight following a cloudburst incident in Jammu and Kashmir, rescue teams were pressed into extensive service to evacuate all the missing people from the site. Along with aiding land operations, the Indian Air Force (IAF) has deployed its helicopters for rescue and relief operations.

As many as eight IAF helicopters have been pressed into service to drop relief material and to airlift injured pilgrims to hospitals and bring back mortal remains.

Speaking on the same, an IAF spokesperson told PTI that four Mi-17V5 and four Cheetal helicopters have been deployed for rescue and relief efforts at the Amarnath shrine. He added that Cheetal helicopters have flown 45 sorties as well as they have inducted five NDRF and Army personnel and 3.5 tonnes of relief material while evacuating 45 survivors from the holy cave, he said.

"The Mi-17V5 helicopters flew 20 sorties, delivered 9.5 tonnes of relief material, and evacuated 64 survivor. The choppers brought back seven mortal remains from the area. An-32 transport aircraft and a Dornier plane are also being utilised to airlift hand-held radar equipment from Imphal to Srinagar. Air assets continue to be on standby at all major air bases in Jammu, Kashmir and Ladakh areas", he said.

Notably, as per the official numbers, so far a total of 16 pilgrims who came for the Amarnath Yatra lost their lives in the floods that came after the massive cloudburst. Around 40 people are still missing.

Amarnath Yatra to begin in a day or two: CRPF

While there is still uncertainty over the resuming of the yatra after the cloudburst incident, the Central Reserve Police Force (CRPF) has assured that the Amarnath Yatra, which was suspended on Friday might resume within a day or two.

Speaking to ANI, Kuldiep Singh, DG, CRPF informed that the critically injured people were airlifted to Srinagar. He further said two people who were buried but were alive have been rescued.

On the other hand, Jammu and Kashmir Lieutenant-Governor Manoj Sinha's office in a statement on Saturday assured that efforts are being made to restore the Yatra at the earliest. Sinha earlier presided over a high-level meeting to review the rescue and relief efforts at Amarnath.