'A New India: Selected Writings 2014-19', released on Arun Jaitley's death anniversary on Aug 24, is a collection of articles penned by the former Union Min. 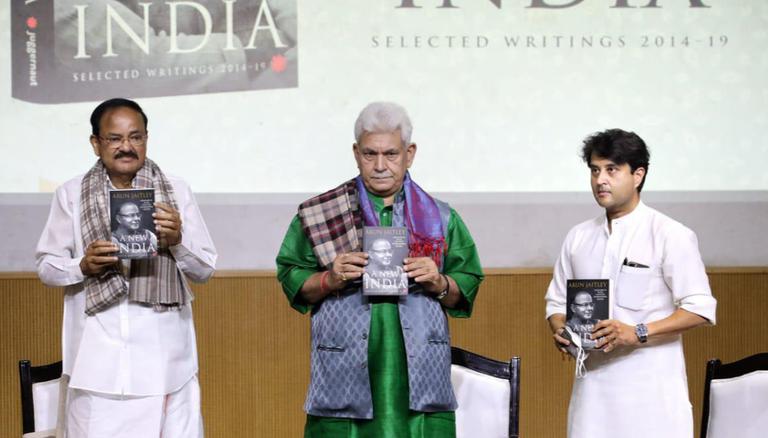 
On Wednesday, former Vice President of India Venkaiah Naidu released the book A New India: Selected Writings 2014-19, which contains articles penned by former Union Minister and BJP leader Arun Jaitley, who passed away in 2019. Several leaders paid their heartfelt tributes to Jaitley on his third death anniversary on August 24.

Speaking at the book launch event, former VP Venkaiah Naidu recalled his close association with Arun Jaitley and said that the BJP stalwart was a "go-to-man" for many knotty problems. Naidu also recalled how they met as student activists and how they both spent time in prison during the turbulent 1970s Emergency. He said he deeply felt Jaitley's absence and terribly missed his wise counsel.

"I recalled my long association with Late Shri Arun Jaitely spanning over four decades from our student days in active politics. Shri Jaitley was my friend, philosopher and guide, whose absence I feel strongly today," Naidu tweeted.

I recalled my long association with Late Shri #ArunJaitely spanning over 4 decades from our student days in active politics. Shri Jaitley was my friend, philosopher and guide, whose absence I feel strongly today. pic.twitter.com/nwOyXR7DNL

Apart from Naidu, the event was also attended by Jammu and Kashmir's Lieutenant Governor Manoj Sinha, and Union Civil Aviation Minister Jyotiraditya Scindia. J&K L-G called Jaitely "a towering man of ideas and ideals" and said that the BJP leader made a significant impact on Indian politics in a variety of ways, including domestic, international, and economic reforms.

Union Minister Jyotiraditya Scindia took to his Twitter and said, "Today, on the death anniversary of Late Shri Arun Jaitley Ji, got an auspicious opportunity to be involved in the release of "A NEW INDIA", a compilation of some of his articles in the form of a book. His excellent thinking towards India and his great perspective were realised only after reading a few pages of the book. Heartfelt Tribute ."

Jaitley had the rare quality of being able to simplify complex issues: PM Modi

Prime Minister Narendra Modi in the foreword of the book 'A New India', which was released on the occasion of Arun Jaitley's death anniversary on Wednesday, wrote that Jaitley was a multi-faceted personality - a friend to many, an excellent legal mind, an effective minister and a consummate communicator.

PM Modi also said that Jaitley had the rare quality of being able to simplify complex issues and brought felicity to public discourse. "There is one side of Mr Jaitley that stands out as extremely important because there have been very few like him. As a public intellectual with an immense grasp on policy issues, he brought a unique quality of felicity to public discourse that is very important for a vibrant democracy," Modi wrote.

Notably, the first finance minister of the Modi administration, Arun Jaitley, passed away on August 24, 2019, at the age of 66.