Jammu & Kashmir administration has decided to lift the ban put on social media sites that was active for more than 6 months following abrogation of Article 370.

In a massive relief for the citizens of Jammu and Kashmir, the administration on Wednesday has revoked the ban on social media. The direction comes after the review of the situation by the Home department of the Union Territory. The ban was imposed last year when the Centre decided to abrogate Article 370 which ended the special status of the erstwhile state and bifurcated it into two Union Territories of J&K and Ladakh.

The restoration process will take 24 to 48 hours

According to sources, orders to restore all websites including social media has been sent to mobile service providers across the state. The restoration process will take 24 to 48 hours. However, internet access across the Union Territory will be restricted to 2G only and internet connectivity with Mac-binding will continue till 17th March 2020. The directions to remain in force unless modified earlier, according to the government of Jammu and Kashmir.

The official notification by the government also said, "While the postpaid sim cardholders shall continue to be provided access to the internet, these services shall not be made available on pre-paid sim cards unless verified as per norms applicable for post-paid connections." 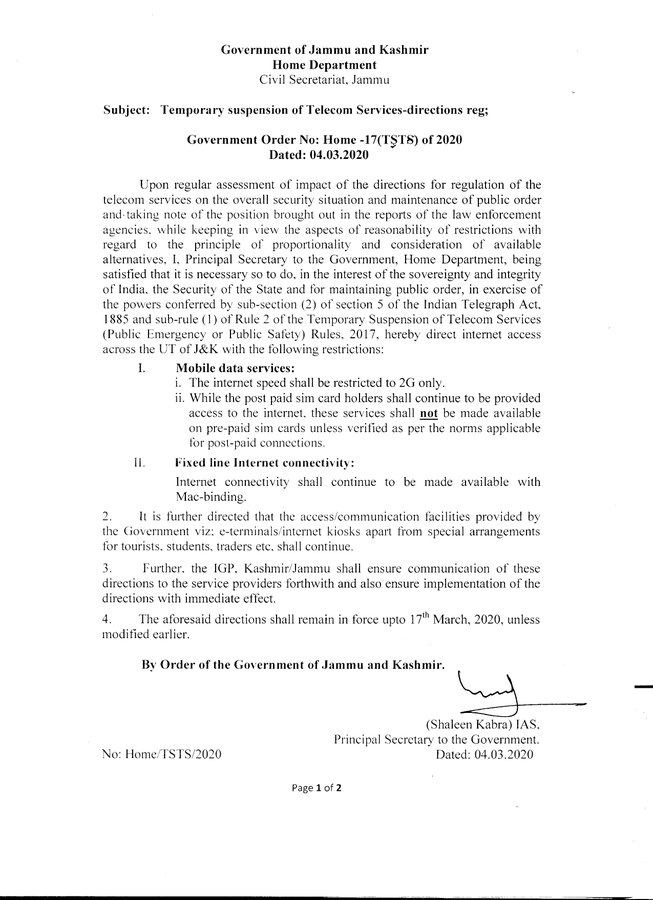 The 2G internet facility on mobile phones was restored in Jammu and Kashmir on January 25 after remaining suspended since August 5 last year. Earlier, the Supreme Court came down heavily on the UT administration for arbitrarily shutting down the internet, the facility described as the fundamental right by the court.

Ruling that “freedom of speech and expression and the freedom to practice any profession or carry on any trade, business or occupation over the medium of Internet enjoys constitutional protection under Article 19 (1) (a) and Article 19 (1) (g)”, the Supreme Court had said that “an order suspending internet services indefinitely is impermissible”.