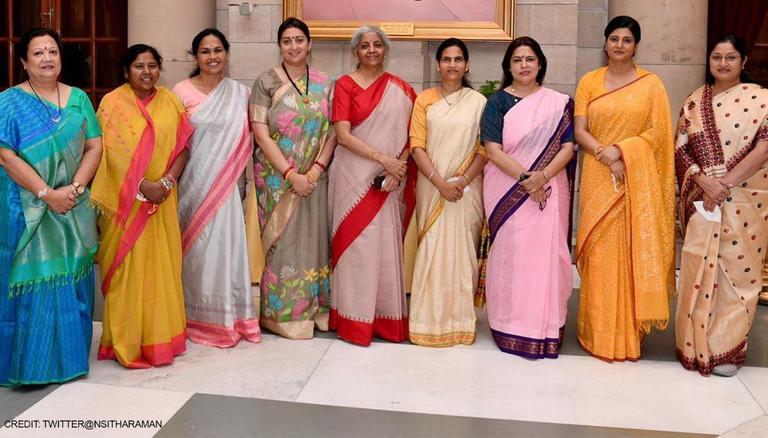 
Marking a substantial revamp of Prime Minister Narendra Modi's Union Cabinet, 36 new Ministers were sworn in at Rashtrapati Bhavan on Wednesday, July 7. The rebuilt Cabinet, which is reported to be the youngest in India's history, also has an equitable representation of caste, gender, and regions across the country. On top of that, with seven new faces, women ministers in the PM's council rose to eleven.

Karandlaje, Darshana Vikram Jardosh, Lekhi, Annapurna Devi, Pratima Bhoumik, Dr Bharati Pravin Pawar, and Apna Dal's Anupriya Singh Patel were among the seven women who took oath as ministers of state. Three of them are first-time MPs, while Patel is returning to the council of ministers after previously serving as the Union Minister of State for Health under Prime Minister Modi.

2. Smriti Irani: Irani, 45,  is a member of India's Union Cabinet. Since May 2019, she has been serving in Prime Minister Narendra Modi's cabinet as the Minister of Women and Child Development in Modi's second ministry. She is a Member of Parliament in the Lok Sabha, representing Amethi, and is a key leader within the Bharatiya Janata Party.

5. Renuka Singh Saruta: Renuka Singh, 57, is a member of the Bharatiya Janata Party and an Indian politician from Chhattisgarh. She is the current Minister of State of Tribal Affairs in Narendra Modi's Ministry.

6. Debashree Chaudhuri: Debasree Chaudhuri, 50, is an Indian politician who served in the second Modi government as the Minister of State for Woman and Child Development. In the 2019 Indian general election, she was elected to the 17th Lok Sabha from the Raiganj constituency in West Bengal as a member of the Bharatiya Janata Party.

7. Anupriya Singh Patel: In a dramatic Cabinet upheaval, Anupriya Patel was appointed to Prime Minister Narendra Modi's Union Cabinet on Wednesday evening. The politician who was sworn in as a minister at Rashtrapati Bhavan has been allocated to the Ministry of Commerce and Industry's Ministry of State.

8. Shobha Karandlaje: Shobha Karandlaje, 55, is a Bharatiya Janata Party politician from Karnataka, India, who is presently serving in the Union Cabinet as the Minister of State for Agriculture and Farmers' Welfare. She is also the Karnataka State Vice President of the Bharatiya Janata Party and a Member of Parliament for the Udupi Chikmagalur Lok Sabha Constituency.

9. Annapurna Devi Yadav: Annapurna Devi Yadav, 51, is an Indian politician. She was elected to the Jharkhand Legislative Assembly as a member of the Rashtriya Janata Dal from Kodarma (Vidhan Sabha constituency). On Wednesday, the politician who was sworn in as a minister at Rashtrapati Bhavan was assigned to the Ministry of State in the Ministry of Commerce and Industry.

10. Sushri Pratima Bhoumik: Pratima Bhowmik, 52, also known as 'Pratima di' Wednesday, made history by becoming the first and only Tripura politician to be sworn in as a central minister. She now works for the Ministry of Social Justice and Empowerment as a Minister of State.

11. Bharati Pravin Pawar: Dr Bharati Pravin Pawar was admitted into Prime Minister Narendra Modi's Union Cabinet on Wednesday evening as part of a major Cabinet reshuffle. The politician, who took oath as a minister at Rashtrapati Bhavan has been assigned to the Ministry of State under the Central government's Ministry of Health and Family Welfare.