On Friday, Amazon CEO Jeff Bezos wrote on microblogging website Twitter that he was rooting for the success of India's Second Moon Mission, Chandrayaan 2.

In an unexpected development, Amazon CEO Jeff Bezos extended his good wishes to India's Second Moon Mission Chandrayaan 2 on Friday, September 6. He wrote on the microblogging website Twitter, that he was rooting for the success of India. 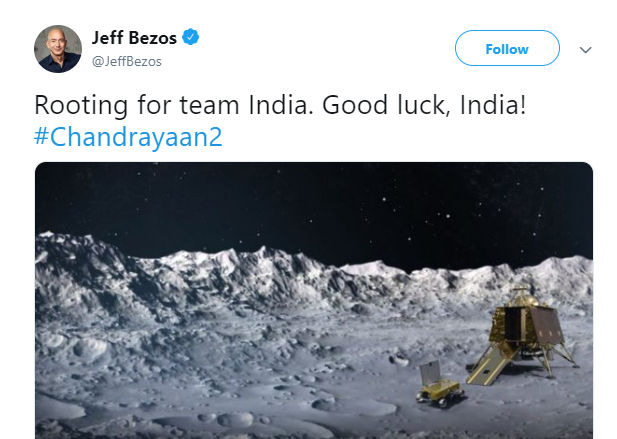 Read: Chandrayaan 2 LIVE Updates: Indira Gandhi And Her Presence On The Moon

Chandrayaan 1, India's first lunar mission was launched in 2008. It had confirmed the presence of water ice on the South Pole of the Moon. However, what differentiates the current mission from the previous one is its scope. Chandrayaan 2 seeks to achieve a soft landing on the Moon, a feat achieved by only the United States of America, Russia, and China. the Mission is unique in the sense that it seeks to land on the Moon's South Polar side. The estimated time of landing is after 1.30 am Indian Standard Time (IST) on September 7. Its Lander is named 'Vikram' after Dr. Vikram Sarabhai, the father of India's space programme. While landing on the Moon, it will have a touchdown velocity of 2 m per second. It will function for a period of one lunar day, equivalent to 14 Earth days. Chandrayaan 2's Rover is Pragyan, a six-wheeled robotic vehicle. There are two cameras on the Orbiter. While the first one is the Orbiter High-Resolution Camera (OHRC) that took pictures of the Moon as soon as it reached near it, the other camera is the Terrain Mapping Camera, which maps the surface of the Moon and helps prepare 3D maps. The total mission time of the Orbiter is one year.

Read: Chandrayaan 2: Things You Need To Know About The Sriharikota Spaceport

Landing missions on the Moon have had a success rate of only 52%. Israel commissioned the last landing mission in April. However, its Lander Beresheet crashed on the lunar surface. The landing spot for Vikram is between Manzinus C and Simpelius N, two craters near the Moon’s South Pole at 70.9°S latitude, 22.7°E longitude. Unlike other Moon Missions, Chandrayaan 2 is more challenging because of the fact that it is going to land in the rugged territory. Prime Minister Narendra Modi will watch the Chandrayaan 2 lunar landing live from the control room of the Indian Space Research Organisation (ISRO) in Bengaluru.

Read: ISRO's Cartoon About Vikram Separating From Chandrayaan-2 Is Adorable