Congrees leader Alka Lamba mocked the 'Shastra Puja' performed by Rajnath Singh on the new Rafale aircraft as he emblazoned it with an 'Om' tilak and laid flowers and coconut, just before he was to take off in it for a sortie. On Tuesday, October 8, Alka Lamba took to Twitter and said, "Think now, France made Rafale has not even reached India and the first major success is achieved  by squashing two green lemons and saved India from the eyes of the evil." 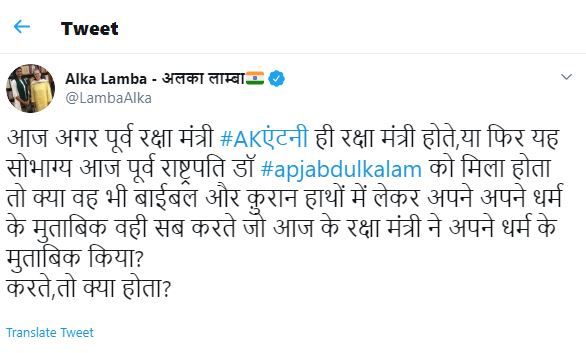 Other Congress leader Sandeep Dikshit also politicised India receiving its first Rafale aircraft. Dikshit complained about the Shastra Puja that Rajnath Singh had performed, and said that the whole religious context of Vijayadashmi and the Rafale aircraft doesn't match. "It is a festival that all of us celebrate. Why do we have to link it with the coming of an aircraft?", said Dikshit.

Defence Minister Rajnath Singh received India's first Rafale combat aircraft, out of the 36 fighter jets ordered as part of the deal between India and France, on behalf of the IAF on Tuesday. Rajnath Singh travelled from Paris to Mérignac, and speaking from the Merignac Air Base, he said, "Today is truly a historic day for the Indian forces and this ceremony shows the depth of the strategic partnership in the relations of India and France."