Directorate General of Civil Aviation (DGCA) has suspended an IndiGo Airlines captain on Monday for a period of three months after establishing that the pilot-in-command attitude towards the senior citizen was unruly. The IndiGo pilot threatened and intimidated a woman passenger and her elderly mother over providing wheelchair assistance on a Chennai-Bengaluru flight last month.

"Your captain on 6E 806 from Chennai to Bangalore on January 13 Jayakrishna harassed, threatened, and prevented me and my 75-year old diabetic mom from disembarking the flight and threatened to arrest us because we asked for wheelchair assistance," the woman had tweeted.

In another tweet, she added that the pilot said, "You have paid piddly 2000 rupees you don't own the aircraft. I will make sure you are barred from the skies he yells my mom and me".

"NONE of the other crew onboard 6E 806 - male Be female - intervened or helped us on the plane", said the passenger adding that the pilot threatened her of consequences if she posted it on social media.

After the victim took to Twitter to make a series of tweets of the ordeal she and her diabetic mother suffered at the hands of the pilot, Union Minister of Civil Aviation of India Hardeep Singh Puri immediately took cognisance on the issue and said that the pilot has been "off-rostered pending full enquiry". 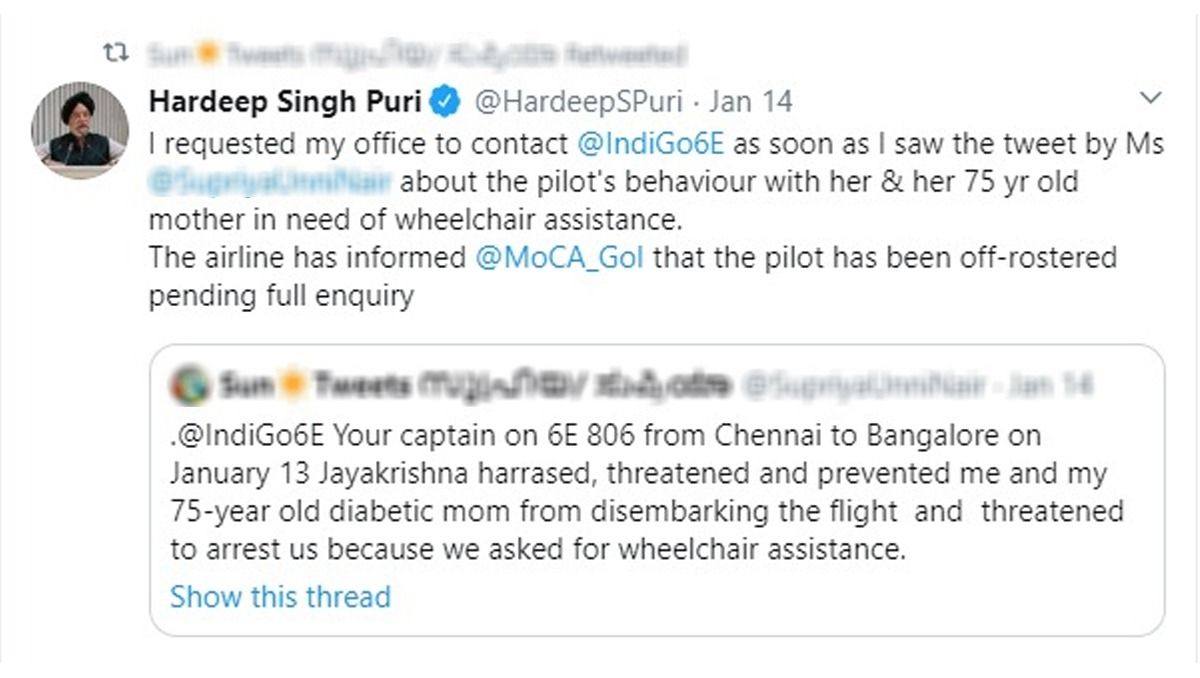 She had described her shocking ordeal saying, "mom was literally shaking by the time we got home. She had her meds and now she is mortified that the pilot will carry out his threats and harm me".

The DGCA has issued a statement which said, "After examining the reply of the PIC (pilot in command) to the show cause notice it was established that the PIC's attitude towards the wheelchair-bound citizen passenger was intimidating, threatening and lacked compassion".

"His action led to avoidable detention of the wheelchair-bound passenger. He exhibited a lack of ability in managing threat and error situation especially when he had to operate another commercial flight after a short duration", the regulator added.