The assets from Vijay Mallya, Nirav Modi, and Mehul Choksi attached by the ED under the PMLA account for 80.45% of the total loss to banks. 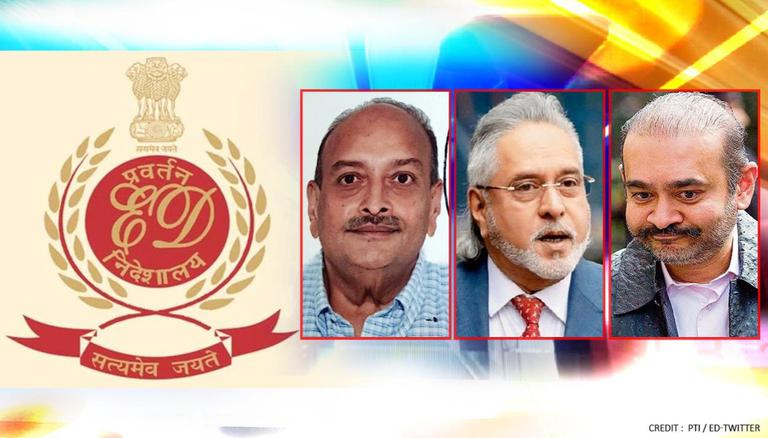 
In a strong crackdown on economic offenders and fugitives, the Enforcement Directorate (ED) on Wednesday announced that it had seized assets worth Rs.18,170.02 crore in the cases pertaining to Vijay Mallya, Nirav Modi, and Mehul Choksi. The assets attached by the ED under the Prevention of Money Laundering Act (PMLA) account for 80.45% of the total loss to banks. In addition to this, the Enforcement Directorate has also transferred a part of the attached/ seized assets of Rs. 9371.17 Crore to the PSBs and Central Government. All these fugitives have been accused of duping public sector banks to the tune of Rs 22,000 crores.

In its official statement, the ED says,"Vijay Mallya, Nirav Modi, and Mehul Choksi have defrauded Public Sector Banks by siphoning off the funds through their companies which resulted in total loss of Rs. 22,585.83 Crore to the banks." The financial watchdog stated that acting on the CBI FIR, the ED had unearthed a myriad web of domestic and international transactions and stashing of assets abroad. "Investigation has also irrevocably proved that these three accused persons used dummy entities controlled by them for rotation and siphoning off the funds provided by the banks.

Taking swift action, the Enforcement Directorate has attached/seize assets worth Rs.18,170.02 crore which included assets worth Rs. 969 crore located in foreign countries. The quantum of the attached and seized assets represents 80.45% of total bank loss of Rs. 22,585.83 Crore, it said.

In Vijay Mallya's case in particular, the ED stated that it has already transferred shares attached by it (worth of Rs. 6,600 crore approx.) to SBI led consortium as per the order of PMLA Special Court, Mumbai earlier this month. "Today, the Debts Recovery Tribunal (DRT) on behalf of SBI led consortium, has sold shares of United Breweries Limited for Rs 5824.50 Crore. Further realisation of Rs 800 Crore by sale of shares is expected by 25th of June," it stated.

On their extradition front, the Enforcement Directorate informed that prosecution Complaints have been filed against all the three accused after completion of PMLA investigation and extradition requests have been sent for these persons to UK and Antigua and Barbuda.

Liquor baron and former MP of the Rajya Sabha Vijay Mallya, currently in London faces charges of fraud and money laundering pertaining to the Rs 9000 crores borrowed by Kingfisher Airlines (KFA) from several Indian banks. A consortium of 11 banks that gave Mallya loans, led by State Bank of India (SBI) had estimated a loss of over Rs 6,200 crore due to Mallya's bad loans and sought restoration of his properties seized by the ED.

Nirav Modi who was arrested on March 19, 2019, has been accused to be the "principal beneficiary" of the fraudulent issuance of letters of undertaking (LoUs) as part of a conspiracy to defraud PNB to the extend of Rs 13,578 crore. Owner of Gitanjali jewelers, Mehul Choksi along with his nephew Nirav Modi is accused of duping the Punjab National Bank and siphoning off the money using letters of undertaking.