Prime Minister Narendra Modi had given a call on July 22, to join the Har Ghar Tiranga movement by hoisting or displaying the national flag at homes. 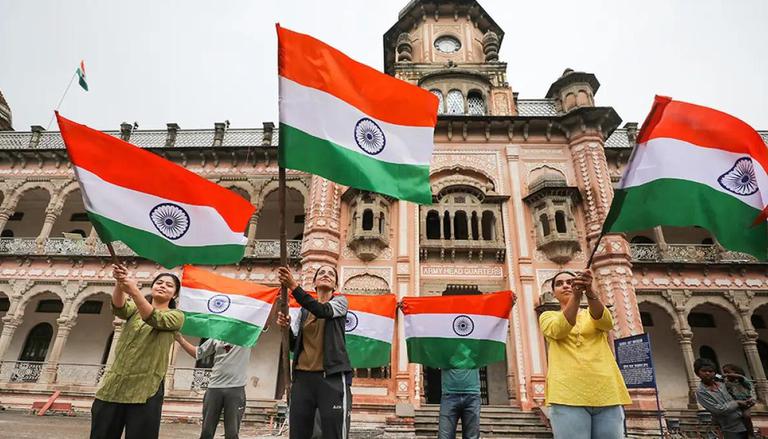 
Over five crore tricolour selfies were uploaded on the ‘Har Ghar Tiranga’ campaign website on the occasion of 76th Independence Day, the Ministry of Culture informed, calling it a “stupendous achievement.”

Prime Minister Narendra Modi had given a call on July 22, to join the 'Har Ghar Tiranga’ movement by hoisting or displaying the national flag at homes.

“In a stupendous achievement, more than five crore ‘Tiranga’ selfies have been uploaded on the ‘Har Ghar Tiranga’ website,” the ministry said in a statement.

The Centre's ‘Har Ghar Tiranga’ initiative is driven by the nodal Ministry of Culture as part of the ‘Azadi Ka Amrit Mahotsav’ celebrations.

The milestone of 5 crores Tiranga selfies was achieved by 4 pm on August 15, thanks to the participation of citizens across India and the world celebrating the special chapter in India’s history. The commemoration of 75 years of independence started on March 12, 2021, as a 75-week countdown to August 15, 2022, and will continue till August 15, 2023.

“The initiative dedicated to fostering a deeper personal connection with the Tiranga requested Indians everywhere to display the flag at home or their place of work as a commitment to the cause of nation building during Amrit Kaal (25 years from now to India at 2047),” the ministry said.

For furthering the clarion call of Hon Prime Minister Shri @NarendraModi ji to join the ‘#HarGharTiranga' movement and for the more than 5 Crore selfies with the Tiranga. It reflects our will to keep India at the top as the Supreme Nation.#AmritMahotsav
1/2 pic.twitter.com/h2cnODL3nk

As a buzz creation activity, the 'Har Ghar Tiranga' website also allowed people to digitally ‘pin a flag’ at a location based on their IP address. This feature also saw pan India and global participation with 5 crore plus pins.

Earlier, Indian citizens were not allowed to hoist the National Flag except on select occasions. This changed after a decade-long legal battle by industrialist Naveen Jindal, which culminated with the landmark Supreme Court judgement of January 23, 2004. The court declared that the right to hoist the National Flag freely with respect and dignity is a fundamental right of an Indian citizen within the meaning of Article 19(1) (a) of the Constitution of India.

Lauding the Centre and PM Modi for the Har Ghar Tiranga campaign, Naveen Jindal has urged every Indian to make ‘Har Din Tiranga’ their motto.