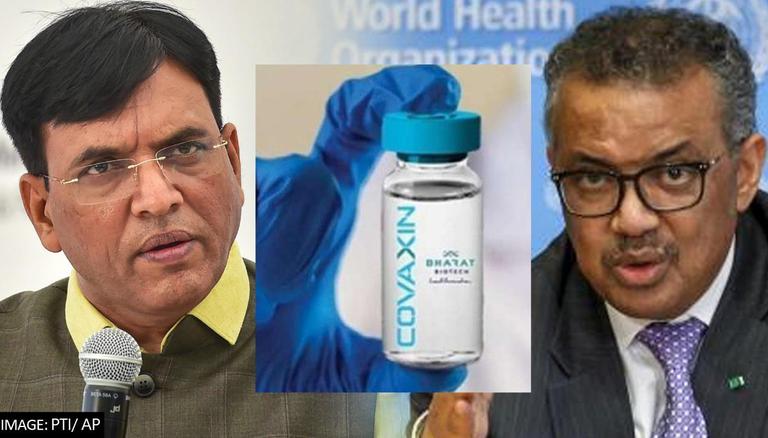 
Union Health Minister Mansukh Mandaviya on Tuesday informed that the World Health Organization's (WHO) Technical Advisory Group will make a final decision on October 26 on the approval for Emergency Use Listing (EUL) of India’s indigenous vaccine Covaxin. Citing global safety and detailed evaluation as its priorities, WHO released a clarification regarding the continued delay in the EUL of Covaxin. On October 20, Mandaviya had a telephonic conversation with WHO Chief Tedros Adhanom Ghebreyesus discussing the emergency usage of Covaxin.

WHO has a system in which there is a technical committee which has approved it (Covaxin) while the other committee is meeting today. The approval for Covaxin will be given on the basis of today's meeting: Union Health Minister Mansukh Mandaviya on Covaxin approval by WHO pic.twitter.com/GQfcdsDgWe

WHO explains delay in Covaxin’s Emergency Use Listing

On October 18, WHO issued a clarification on the continued delay in the emergency use listing of Covaxin developed by Bharat Biotech. Taking to Twitter, the global health body stated that they are ‘well aware that people are waiting,’ but they cannot ‘cut corners’ before recommending the vaccine for emergency use. WHO asserted that they ‘must evaluate it thoroughly' to make sure it is safe for the people around the world and is effective against the COVID-19.

We are aware that many people are waiting for WHO’s recommendation for Covaxin to be included in the #COVID19 Emergency Use Listing, but we cannot cut corners - before recommending a product for emergency use, we must evaluate it thoroughly to make sure it is safe and effective. pic.twitter.com/GDx8GAc1KU

In yet another tweet, WHO added that Bharat Biotech has been submitting data required by WHO on a ‘rolling basis' and that the global experts are reviewing it and they need one last piece of information to complete its evaluation. As per the world health body, the Emergency Use Listing process done by it and the Technical Advisory Group of independent experts is centered on determining if a manufactured vaccine is quality-assured, safe, and effective.

Bharat Biotech - the manufacturer of Covaxin - has been submitting data to WHO on a rolling basis and WHO experts have reviewed these data.
WHO is expecting one additional piece of information from the company today. https://t.co/kfaNI05KIw

Covaxin, which was developed by Bharat Biotech in partnership with the National Institute of Virology and the Indian Council of Medical Research (ICMR), demonstrated a 78% efficacy rate in clinical testing. It was cleared for emergency use by the Indian government in January this year, but it has yet to be approved by the WHO. The six COVID-19 vaccines that have gained emergency use authorisation from the WHO are the Pfizer-BioNTech jab, and the two versions of AstraZeneca-Oxford vaccines— one being the AstraZeneca vaccine produced by SK Bio and the Serum Institute of India (SII), and the other - AstraZeneca EU, Janssen, Moderna, and Sinopharm vaccines.