ICG Kolkata had warned fishermen against venturing out to the seas due to a sudden weather change. The boat was stranded due to engine failure near the island. 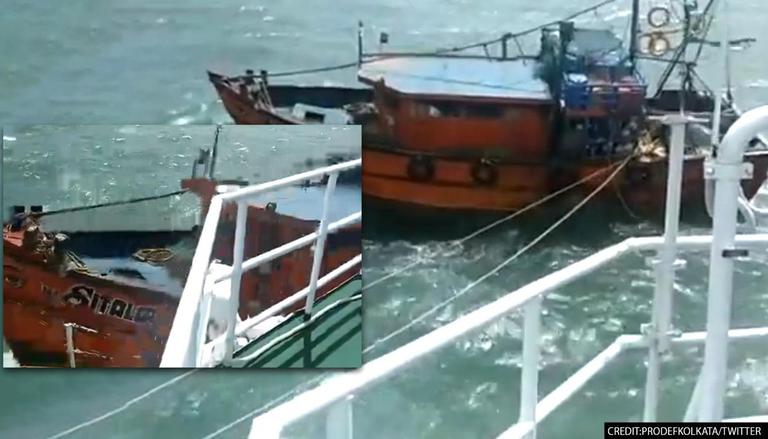 
The Indian Coast Guard (ICG) on Sunday rescued 11 fishermen after their boat suffered an engine failure. The boat along with the fishing crew was stuck in the Bay of Bengal near Sagar Island when the ICG saved them. The fishing boat named MAA SHITALA was stranded when the ICG ships at sea received information about the sudden weather changes causing a swell in the seas.

The ICG Kolkata headquarters had earlier warned fishermen against venturing out to the seas due to a sudden change in weather. During the time, a fishing boat was reported to be stranded near Sagar Island with an engine failure. The Coast Guard located the boat adrift in the area and rescued the ship along with its crew after a swift rescue operation.

Earlier on Sunday, the PRO informed that fishermen in the region were warned of a sudden change in weather. All fishing boats were asked to return to shore due to the unsafe conditions. “ICG Ships & aircraft deployed at sea alerting fishermen to return harbour due to prevailing low-pressure area in the Bay of Bengal. Efforts of Coast Guard ensured the return of 100 boats in Odisha and 400 boats in West Bengal,” the PRO had tweeted.

According to the  Indian Meteorological Department (IMD), a depression formed over the Bay of Bengal has intensified to become a deep depression and has crossed the Odisha coast on Monday morning. The department predicted heavy rainfall in the state along with West Bengal. According to the weather department, western and central India is expected to receive heavy rainfall throughout the day. Extreme rainfall is expected over Odisha and Chhattisgarh on September 13, and over Madhya Pradesh on September 14.