Speaking at the commissioning event of the aircraft carrier, Rajnath Singh called INS Vikrant an icon of India's pride, power and determination. 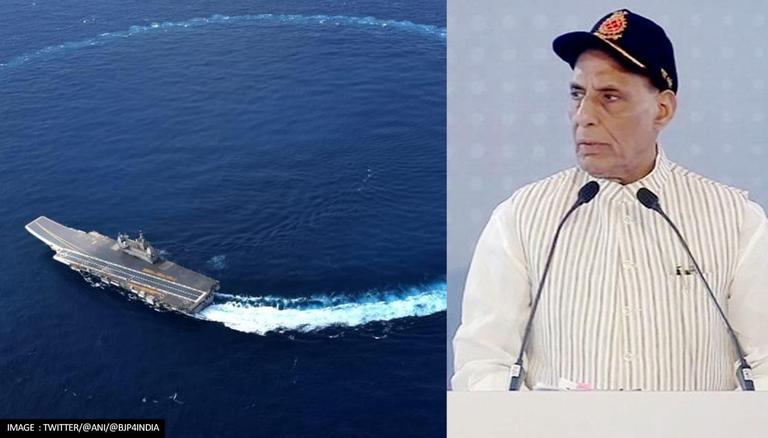 
Defence Minister Rajnath Singh on Friday hailed the country's first indigenous aircraft carrier as an "exceptional symbol of self-reliant and aspirational India" that will further strengthen the capability of the Indian Navy. He also called it "an icon of India's pride, power and determination". Notably, Prime Minister Narendra Modi commissioned INS Vikrant at Cochin Shipyard Limited and also unveiled the new Naval Ensign (flag) for the Indian Navy.

Addressing the event, Singh said, "The commissioning of INS Vikrant is a confirmation that our endeavour for 'self-reliant India' is not an isolated policy. This is an important part of the huge transformative change taking place in India under the leadership of the Prime Minister."

"The government has made path-breaking changes in the sectors like health, education, trade, transport and communication," the Defence Minister said, adding, "The commissioning of INS Vikrant during the initial period of Amritkal displayed the government’s determination towards the nation’s security in the next 25 years."

Calling INS Vikrant India's pride, he said, "It is an icon of India's pride, power and determination. And its commissioning is an unprecedented achievement in terms of indigenous warship and construction." "On this historic day, I appreciate the efforts of the Indian Navy and Cochin Shipyard and also appreciate the efforts of all people associated with the project. I especially congratulate the Chief of Naval Staff and his entire team for their focused efforts in commissioning of INS Vikrant," he added.

Singh also assured India's friendly foreign countries that with the commissioning of INS Vikrant will enhance India's capability of fulfilling its requirement of collective security. "We believe in free, open and inclusive indo-pacific and we are continuously making efforts that are guided by our PM Modi’s vision of Security And Growth for All in the Region (SAGAR)," he stated.

Speaking at the event, Rajnath Singh elaborated on the improvements made by the central government in the country's defence sector. "Significant improvements have been made by the government in the Defence Production Policy and Export Promotion Policy," he said, adding, "FDI limit has been increased in the sector, defence industrial corridors have been developed. And also, 68 per cent of the capital acquisition budget is Rs 85,000 crore of the defence sector for the domestic industry."

"As part of the efforts to achieve self-reliance in defence manufacturing and minimise imports by the Defence Public Sector Undertakings (DPSUs), a positive indigenisation list has been notified by the department," he added. Singh further said, "Our mission is not only Make In India but to Make for the World. And it is evident as India’s goods exports crossed a record high USD 400 billion mark last year."