On Friday, the Indian Space Research Organisation (ISRO) has released the first pictures of Moon as captured by the Orbiter High-Resolution Camera (OHRC)

On Friday, the Indian Space Research Organisation (ISRO) has released the first pictures of the Moon. The Orbiter High-Resolution Camera (OHRC), an essential component of the country’s Second Moon Mission Chandrayaan 2, was responsible for providing very high spatial resolution images of the Moon. According to ISRO, it has a spatial resolution of 25 cm from a 100 km orbit. The OHRC operates in a Panchromatic band of 450-800 nm. This, in turn, paves the way for the sharpest images from a lunar orbiter platform. It has emerged as an important tool for lunar topography studies of specific areas.

The ISRO has given specific details about the timing and location of the image. It states that the image was taken at 4.38 am Indian Standard Time (IST) on September 5 from an altitude of 100 km. Located in the southern polar area of the moon, the image covered a part of the BOGUSLAWSKY E crater and its surroundings. It has a diameter of 14 km and a depth of 3 km. This crater has been named after Palon H Ludwig von Boguslawsky, who was a German astronomer. The latitude and longitude coordinates of this spot have been given as 74.623 South and 54.087 East. Images showcasing close up views have also been released to give more clarity on specific aspects like the presence of small craters and boulders. 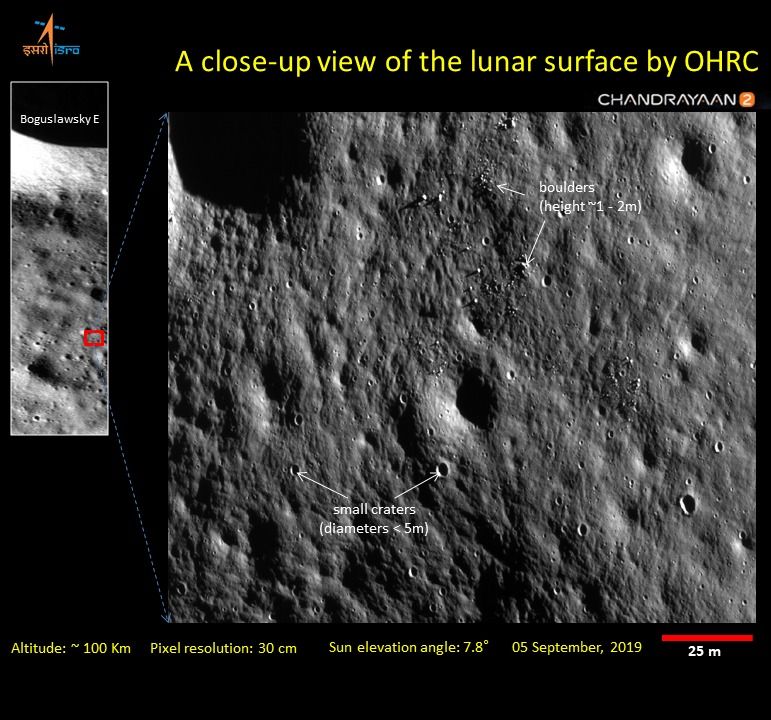 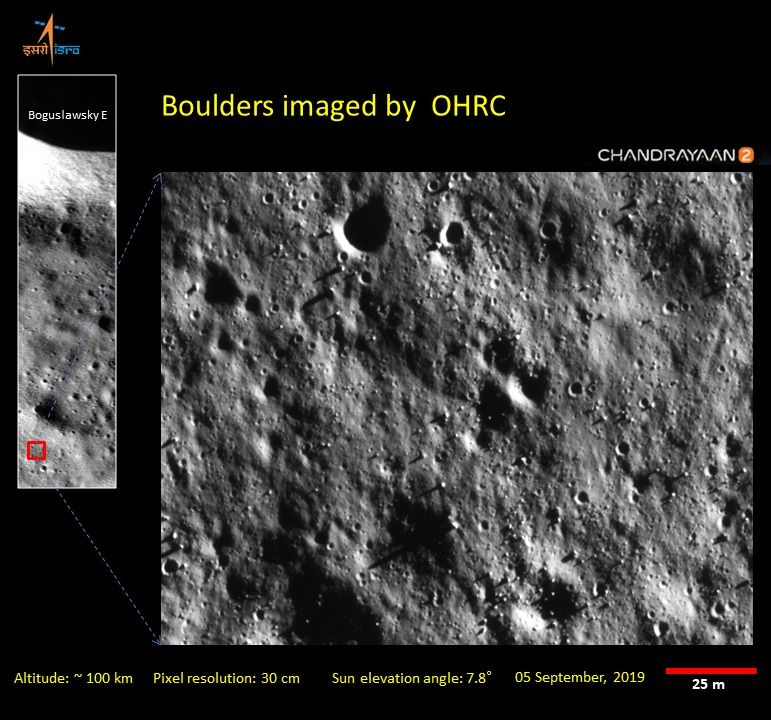 Launched on July 22, the Chandrayaan 2 mission suffered a minor glitch at the last moment with the loss of communication with the Vikram lander. Confusion persists over whether Vikram achieved the soft landing on the Moon. In the meanwhile, ISRO shared the findings of the Chandrayaan 2 orbiter's payload Large Area Soft X-ray Spectrometer (CLASS) on Thursday. It detected charged particles and their intensity variations during its first passage through the geotail within the first few days of observation.