As the JNU students on Monday held a massive protest march till the Parliament demanding a complete rollback of the hostel manual, Section 144 has been imposed

As the JNU students on Monday held a massive protest march till the Parliament demanding a complete rollback of the hostel manual, Section 144 has been imposed. Stopping the students at the Jor Bagh area, the Delhi Police issued a last ultimatum to the students urging them to not move forward, even as the students continued to raise slogans against them. Sources also informed that the Delhi Police is ready at the location with water cannons and have reportedly lathi-charged the students.

Earlier in the day, sources said that as many as 50 students who were attempting to break the barricades were detained. The Ministry of Human Resource Development has set up a 3-member high-power committee to resolve the issues of the JNU students via dialogue, said sources. Reportedly, 1400 personnel have been deployed around the Parliament.

What are the students demanding?

The JNU students marching towards the Parliament as the winter session commenced on Monday, are demanding a complete rollback of fee-hike for all in JNU. They allege that crores of money for secondary and higher cess have not been utilised, quoting the CAG report. They are against the National Education Policy claiming that it closes the door on public-funded education. They are also opposing fee hike in IITs, CBSE, Navodaya Vidyalaya, medical colleges in Uttarakhand, etc. 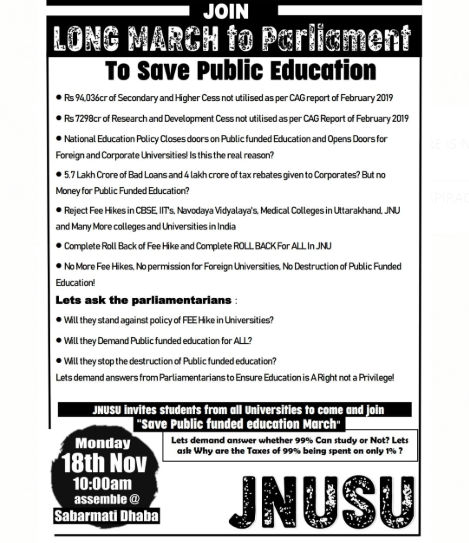 Backing the JNU students protesting against the Hostel fee hike, the JNU Teachers Association on Monday, have held the Administration responsible for the 'disturbed atmosphere of the campus'. Disagreeing with the JNU administration's hike in hostel charges, it has slammed the administration for not engaging in any dialogue with the students. Furthermore, they stated that the hike in hostel charges was a step in destroying the character of JNU as a public institution.

"Firstly, we cannot disagree more with the view that the changes in the hostel charges are reasonable and necessary," stated the Association in a letter addressed to the Vice-Chancellor Jagadesh Kumar. It added, " Secondly, we hold you and the Administration led by you, responsible for the disturbed atmosphere of the campus today." It also reminded the VC of the referendum signed by the Association asking him to step down from his post.

On Wednesday, JNU administration announced a rollback the hostel fees after massive and continuous protest by the students. Announcing the rollback on Twitter, the Education Secretary R Subrahmanyam said that the JNU executive committee has rolled back the fees that was hiked. The Secretary also added that it is time to go back to classes as the JNU executive committee has proposed a scheme for economic assistance to EWS students.

This comes after the students last week held a protest outside the UGC and submitted a memorandum of their demands to the EC members. The students led a massive protest since Monday morning at the convocation venue against the "anti-student" policies of the varsity's administration. While the administration barricaded the area outside the auditorium, clashes were reported between the forces deployed for security and JNUSU students.

Why were the students protesting?

The students' union has been on a strike against the Draft Hostel Manual which was approved by the Inter-Hall Administration. They claim that the manual has provisions for fee hike, curfew timings and dress code restrictions for students. They have said they will not end the strike till the Hostel Manual is withdrawn. It is said that after the fee hike is implemented, JNU will be most expensive Central University.

Earlier on Thursday, objectionable and abusive remarks were written around a soon-to-be-unveiled statue of Swami Vivekananda on JNU campus amid student protests. Soon after the incident, JNU released an official statement condemning the act and assured that strict action will be taken against those involved. While the student union has maintained that they were not involved in the incident and had reportedly washed off the written remarks after it came to light, the Delhi Police has lodged an FIR on Sunday. Earlier, JNU administration also had filed two complaints against those who had defaced the VC's building during protests.