On August 2, the Indian Coast Guard rescued as many as five fishermen stranded at sea in Kerala's Thrissur district. 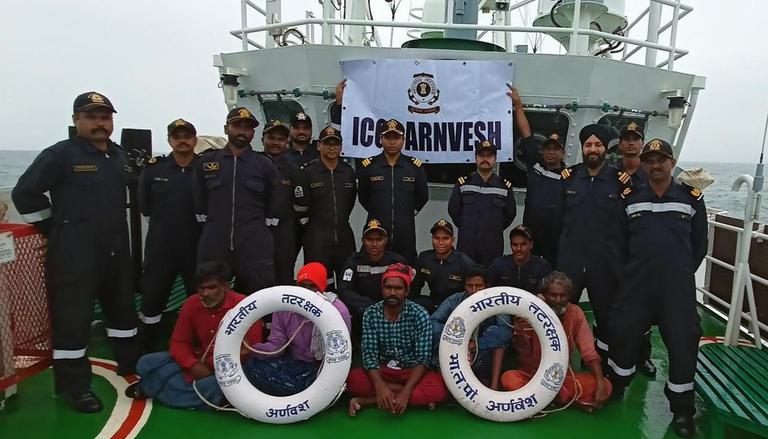 
In a breaking development, on August 2, the Indian Coast Guard rescued as many as 5 fishermen stranded at sea in Kerala's Thrissur district.

As soon as the information of the five fishermen being stuck at sea reached the Coast Guard, they jumped into action to locate and rescue the fishermen amid inclement weather.

As per sources, the state administration gave the information to the Coast Guard, who immediately diverted their patrolling vessel Arnavesh to rescue the fishermen. All the occupants of the boat have been evacuated to safety.

This is not the first incident in the recent past that saw the ICG spring into action to recuse sailors, including fishermen stranded at sea.

Earlier in July, the ICG initiated a rescue effort in the Arabian Sea close to the Porbandar coast of Gujarat after getting a distress call from the MT Global King I vessel's crew. The 22-member crew reportedly left the ship after it flooded on board, according to ICG officials.

The 22 crew members of the stranded merchant vessel were rescued in a safe manner. Twenty of the crew members that were saved were Indian citizens, together with one Pakistani and one Sri Lankan, and they were eventually transported to the Porbandar port by ICG ships and helicopters.

In June, Five fishermen, stranded in a capsized boat off Kochi, were rescued by the Indian Coast Guard and merchant vessel MV Alliance on June 30. MV Alliance, bound for Kandla, sighted the capsized boat at mid-sea with the fishermen floating in its vicinity, as per a press release.

On receipt of the alert, the Coast Guard fast patrol vessel (FPV) 'Aryaman' operating nearby was directed to complement the search and rescue effort.

Considering the rough conditions, inter-ship transfer of personnel to the Coast Guard ship was not feasible, so its advanced light helicopter (ALH) was sent. The ALH took the fisherman from MV Alliance and landed back at the Coast Guard air enclave, Kochi, the release said.