Madurai: Meenakshi Amman Temple Lit Up On The Occasion Of Karthigai Deepam

The lighting of one lakh clay lamps on the premises marked the ‘Karthigai Deepam’ celebration at Sri Meenakshi Sundareswarar Temple in Madurai. Volunteers and temple officials arranged clay lamps with oil around the golden lotus tank, on the terrace and along the corridors around Amman Sannidhi from 4 p.m. Volunteers said that they wanted to light up every nook and corner to decorate the ancient temple in all its grandeur.

The lamps were lit at 6 p.m. by temple staff and volunteers and many devotees waited around the golden lotus tank to catch a glimpse of the fully illuminated tank and terrace reflected in the waters. Police were deployed at Meenakshi Sundareswarar temple to monitor the crowd and ensure the safe visit of devotees. 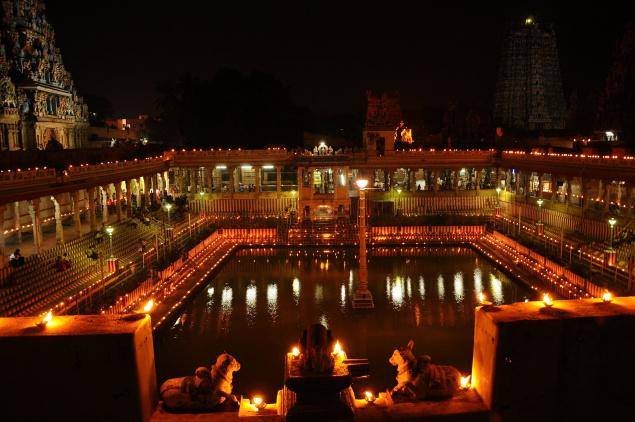 The Karthigai Deepam festival celebrated mainly in Tamil Nadu, on Poornima, can be roughly described as Diwali of South India, observed in every home and every temple.

Lord Shiva appeared as an endless flame of light before Lord Vishnu and Lord Brahma, who each considered himself supreme and said that the matter could be tested if the two could search for Lord Shiva’s Head and feet. Lord Vishnu took the form of a boar and delved deep into the earth, Lord Brahma that of a swan and flew towards the skies.

Lord Vishnu failed in his search and returned. But Lord Brahma, chancing upon a piece of Thazhambu, a flower, learnt from it that it had been floating down for thirty thousand years from Lord Shiva’s head. He seized upon this and claimed to Lord Shiva that he had seen the other’s top. Lord Siva realised the falsehood and pronounced that there would never be a temple for Lord Brahma in this world. He also interdicted the use of the flower Thazhambu in his worship. Lord Shiva appeared as a flame, this day is called Maha Deepam.

How is it Celebrated?

Since this is a festival of lights, the houses are decorated with the oil lamps called “Agal Vizhakku”. These lamps are considered as an auspicious symbol wherein lighting them depicts warding off darkness with light. The whole Karthigai month is considered auspicious and lamps are lit throughout the month and Kolams (rangoli) is drawn in front of the houses.

READ | Uttarakhand: Badrinath Temple decorated ahead of the closing of the temple for winter