Chief Minister Uddhav Thackeray, on Sunday, has stated that the government will pay for the fare of the migrant workers, using the Chief minister's Relief Fund.

Assuring all migrants travelling to and from Maharashtra to their home states via Centre's special 'Shramik trains', CM Uddhav Thackeray, on Sunday, has stated that the government will pay for the fare of the migrant workers, using the Chief minister's Relief Fund. This development comes after 16 migrant labourers who were sleeping on railway tracks were mowed down by an empty goods rake in Aurangabad. The migrant labourers were reportedly walking along the rail tracks to Madhya Pradesh and slept on the rail tracks due to exhaustion.

(Foreign workers are returning to their home state and workers from Maharashtra are coming from other states. Considering that they do not have money to pay for the train journey, Chief Minister Uddhav Balasaheb Thackeray has decided to pay the ticket fee from the Chief Minister's Assistance Fund.)

Immediately after the government announced this, Congress leader Sanjay Nirupam claimed that it was a 'bogus move'. Attaching a train ticket allegedly paid by a migrant worker at Kurla Terminus, he claimed that Bihar migrants have paid for their ticket. As the government has just released the order, several netizens have pointed out to Nirupam that the order will come into force from Monday. 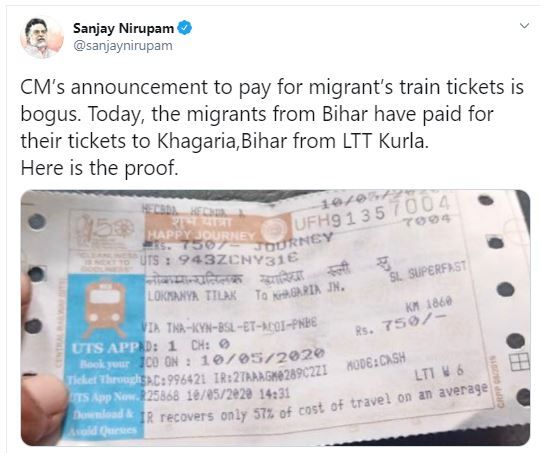 Coronavirus Live Updates: Railways to gradually resume services from May 12;cases at 62939

On May 1, the Ministry of Home Affairs allowed the movement of stranded migrants, pilgrims, tourists, students and other persons across India via special trains called 'Shramik trains' operated by the Ministry of Railways. Soon, several reports claimed that migrants were being charged rail fare to travel back home, which led to the Congress party offering to the Centre to pay for all migrant labourers' rail fare. The Centre hit back claiming that 85% of the fare cost was borne by Centre while 15% were borne by state governments, adding that only Kerala, Rajasthan and Maharashtra had not paid their share.

After PM Modi had announced the first phase of lockdown, on March 28, thousands of migrant workers were seen thronging the Delhi-Uttar Pradesh border at Delhi's Anand Vihar Interstate Bus Terminal in the hope of reaching their homes, defying lockdown and creating a health hazard. Similarly, after PM Modi announced the extension of the lockdown till May 3, on April 14, around 2,000 migrant workers gathered at Bandra station, under the illusion of boarding 'Jansdharan Express' trains to UP, Bengal and Bihar. Apart from this several visuals have been seen of thousands of migrants walking across state borders to reach their native homes due to loss of income amid lockdown.