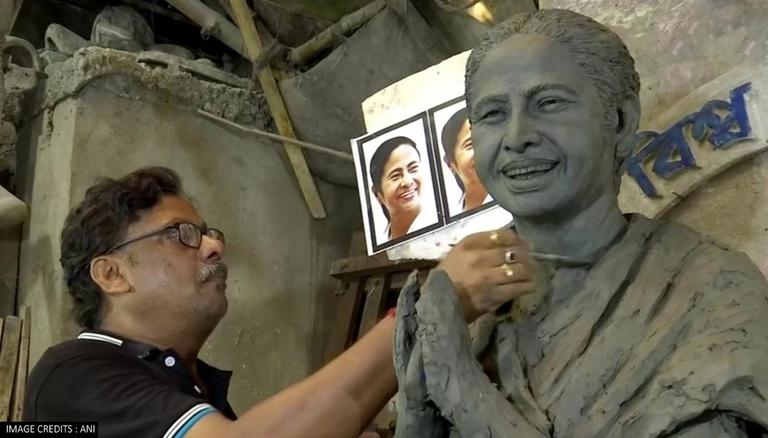 "Every person in Bengal considers her as Goddess Durga. The benefits she provided to people haven't been seen in world," said Partha Sarkar, Vice Pres, Nazrul Park Unnayan Samiti to ANI. He added, " The 10 hands of Goddess Durga will be shown reaching out to people with schemes like Lakhi Bhandar, Shikshashree, Swasthya Sathi etc.

Meanwhile, idol maker Mintu Pal described the design of the idol saying, " The fibreglass idol will be prepared, keeping the facial impression of the CM in mind. The idol will sport a white saree and in the background there will be the logo of Biswa Bangla. Talking about pricing, Crowdnxt Mediia Art Director Dipanwita Bagchi said, "It costs Rs 2.10 lakhs. Her 10 hands will represent her govt schemes. It was a big challenge for me to complete this concept".

READ | 'One of the most celebrated authors': Mamata Banerjee condoles Buddhadeb Guha's demise

"Every person in Bengal considers her as Goddess Durga. The benefits she provided to people haven't been seen in world," says Partha Sarkar, Vice Pres, Nazrul Park Unnayan Samiti pic.twitter.com/wZZzUlUTBc

Meanwhile, the CM's home constituency Bhowanipore is planning to have a 'Khela Hobe' theme to Durga Puja festivities this year. The slogan - coined by the TMC during its poll campaign in May will be depicted in the pandals via sports-themed images and objects. Organisers plan to screen live football and cricket matches, while a model of Olympic gold medalist Neeraj Chopra with his javelin will be also be made.

"Didi stays in our locality. She has coined the slogan Khela Hobe. We, therefore, plan to use the spirit of this slogan through models. You will see East Bengal, Mohun Bagan, all in our pandal," said organiser Subhankar Roy Choudhury, general secretary Bhowanipur Durgotsab Samity.

In a bid to keep Durga Puja safe, the community Durga Puja committees in Kolkata have decided to ensure that all those who are involved in the rituals and other related works are vaccinated in the next three months. "From our members and locals frequenting the pandals to artisans, priests, dhakis and electricians -- everyone will have to get COVID vaccines in the next three months," said Forum for Durgotsab official Partha Ghosh to PTI. Forum for Durgotsab, an umbrella organisation of 550 community Durga Pujas in Kolkata and neighbouring areas, also published guidelines to ensure that the festivities are held following COVID-safety protocols.