A batch of ‘Raja Mircha,' also known as king chilli, from Nagaland was flown to London through Guwahati by air for the first time on Wednesday. 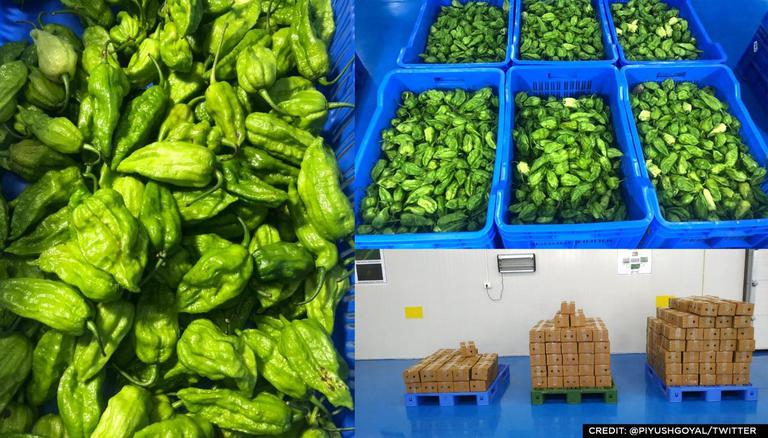 
Ministry of Commerce & Industry informed that a batch of ‘Raja Mircha,' also known as king chilli, from Nagaland was flown to London through Guwahati by air for the first time on Wednesday, July 28, providing a big boost to exports of Geographical Indications (GI) items from the north-eastern region.

According to Scoville Heat Units (SHUs), the King Chilli consignment is also the hottest in the world. The shipment came from Tening, Nagaland's Peren district, and was packed at an APEDA-supported packhouse in Guwahati. Nagaland's chilli is also known as 'Bhoot Jolokia' or 'Ghost pepper'. In 2008, it received GI certification.

The first export consignment of fresh King Chilli was managed by APEDA and the Nagaland State Agricultural Marketing Board (NSAMB). In June and July 2021, APEDA collaborated with NSAMB to deliver samples for laboratory testing, and the results were positive because it was grown organically, the ministry informed.

Because of its perishable nature, exporting fresh King Chilli was a challenge. Nagaland King Chilli is a member of the Capsicum genus in the Solanaceae family. The Naga king chilli has long been regarded as the world's hottest chilli, consistently ranking in the top five on lists of the hottest chillies in the world based on SHUs, the ministry added.

APEDA intends to maintain its focus on the north-eastern region and has been conducting promotional initiatives to put the region on the export map. APEDA assisted the export of Tripura jackfruits to London and Germany, Assam lemon to London, Assam red rice to the United States, and Leteku ‘Burmese Grape' to Dubai in 2021.

In some places, Raja Mircha is also called Naga Morich. The Raja Mircha is a small-medium shrub with huge leaves, small, five-petaled flowers, and blisteringly hot fruit, like many other variants of the species. It is slightly smaller than the Bih Jolokia and has a pimply ribbed texture in contrast to the smoother flesh of the other two types.