The festival of Navratri has started from Sunday as we see the arrangements of the festival in full swing. Body painting tattoos are also a part of the Navratri

The festival of Navratri has started from Sunday and arrangements for the festival in full swing. For many, body painting tattoos on social issues are also a part of the Navratri celebrations this year. People have been visiting tattoo studios to get themselves painted with tattoos on social issues such as article 370 or that of the Chandrayaan-2.

Body tattoos have become a trend among the youth today as people from urban and semi-urban areas are seen sporting a variety of tattoos. To add a colour of festivity to the trend, youngsters from Surat are visiting the local tattoo studios on the eve of Navratri to get their body painted with tattoos on social issues and achievements that we as Indian have had this year. 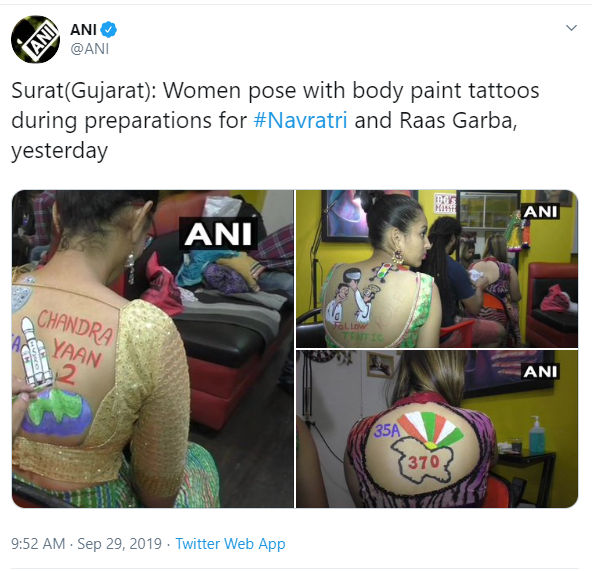 ANI has shared some images of young students and professionals all decked up to resonate the festive vibes with tattoos of Article 370 and 35A that were revoked this year, some have also got themselves tattoos of Chandrayaan-2 which was a path-breaking lunar mission by India that brought the world’s attention on the nation’s might in the domain of astronomy and space studies, while some were seen sporting tattoos of Prime Minister Narendra Modi and President of United States Donald Trump. Some have sported tattoos of climate change and plastic ban which serves the purpose of spreading awareness on social issues on the eve of the festival and celebration.

Youth wants to send a message

A local tattoo artist from Surat said that the youth is trying to send a message by getting tattoos of climate change, Chandrayaan-2, and the new traffic rules through their tattoos. Payal Dani, a student who had gotten a body paint tattoo on the recent abrogation of provisions of Article 370 and 35A said she opted for it to give a message to the society.

Navratri is being celebrated from September 29 to October 7 this year with the worship of the nine different forms of Goddess Durga and the preparations have begun in full swing in different parts of the country.