In an explosive development in the Vazegate scandal that has rocked the Mumbai Police and the Maharashtra government, a police report accessed exclusively by Republic reveals that suspended and arrested API Sachin Vaze 'reported' solely to former Mumbai Police commissioner Param Bir Singh and had been effectively made in-charge of the Crime Intelligence Unit (CIU) upon his reinstatement, against the verbal opposition of the Joint CP Crime.

A secret police report from a top Maharashtra police officer to the state government, which has now been accessed by Republic, revealed that Sachin Vaze had 'not followed any rules' and had been instructed by ex-Commissioner Param Bir Singh on arrests and raids on illegal activities, and indicates that the former was given a free hand by the former top cop. Further, the report states that Sachin Vaze had not reported to any senior officers of the Crime Branch and had prohibited his colleague at CIU from doing the same. The report established that Sachin Vaze was present at crucial meetings including the ones on the fake TRP scam, Dilip Chabriya case, Antilia bomb scare probe and others, including the Mumbai CP's briefings to ministers on these matters.

The report also states that the Joint Commissioner of Police had 'strongly opposed' bringing back Sachin Vaze to the CIU but had 'unwillingly' issued the order to so on the insistence of ex-Mumbai Police Commissioner Param Bir Singh. Further, the report revealed that Sachin Vaze did not report to any officer of the crime branch and that no personnel from the Crime Branch had reviewed, opined or issued directions to Sachin Vaze and the cases handled by him. The accessed report also stated that Sachin Vaze had used high-end luxurious cars (possibly from among the ones that have been seized by the NIA so far) apart from three government-issued vehicles to commute to his office. As per the report, the rank of the incharge of the Crime Branch is to be of a Police Inspector. However, the order to name Sachin Vaze who is an API as the CIU in-charge was allegedly an oral one from Param Bir Singh. 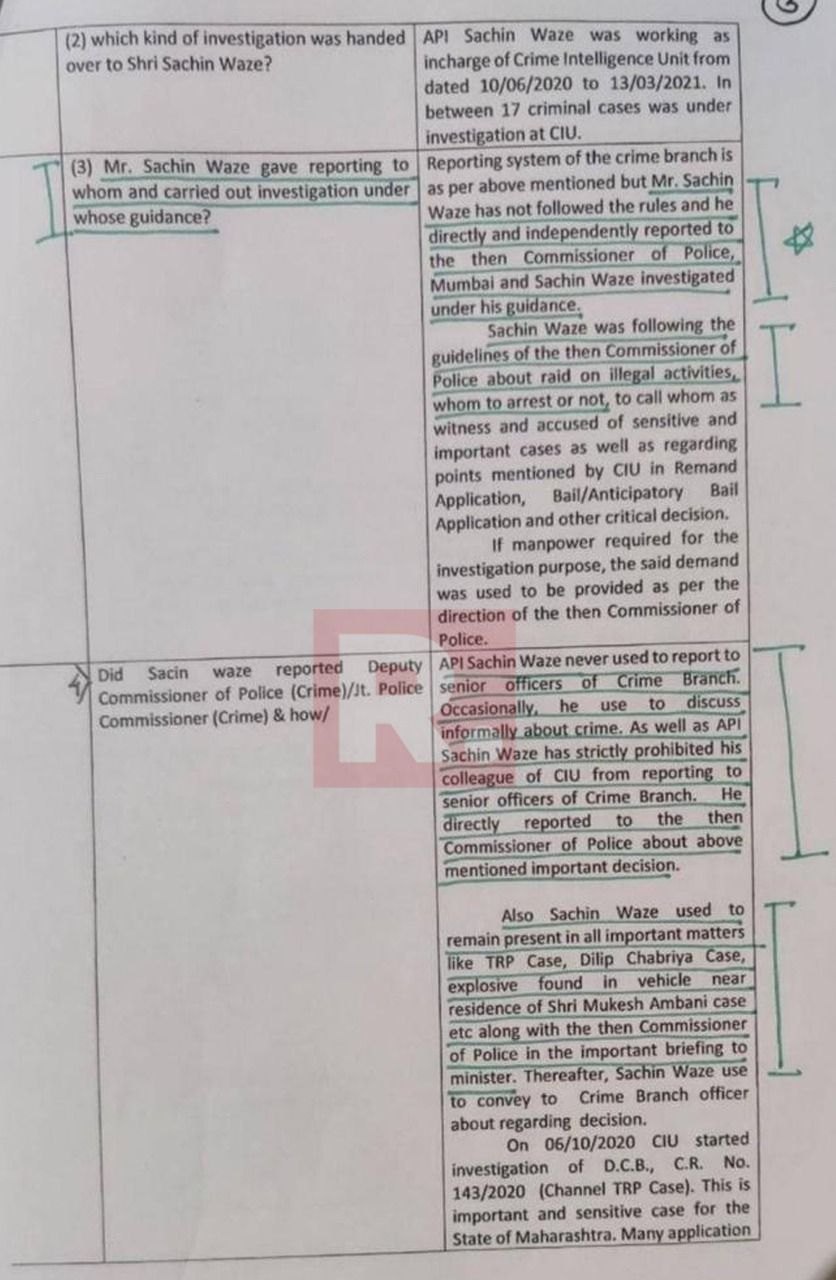 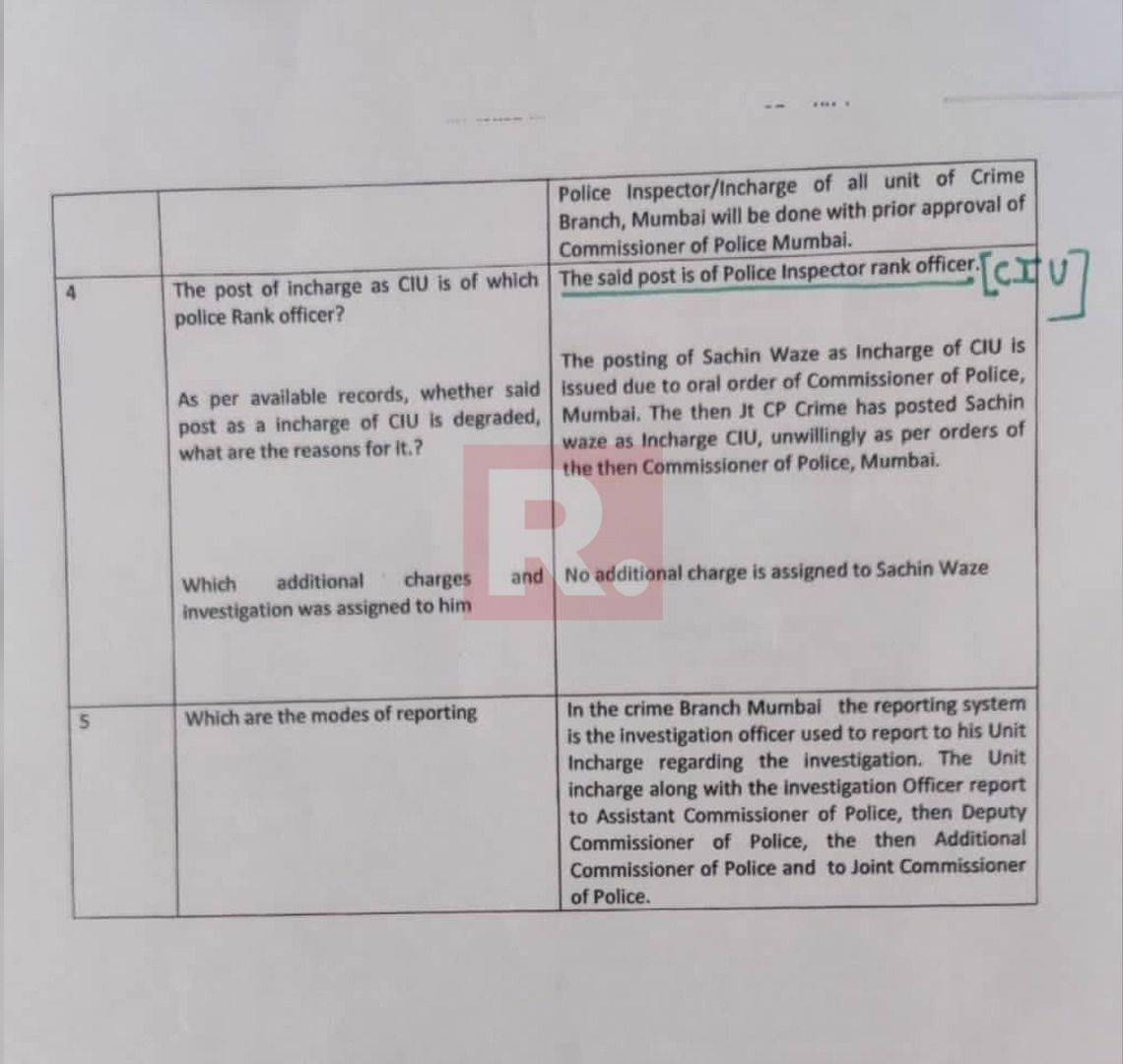 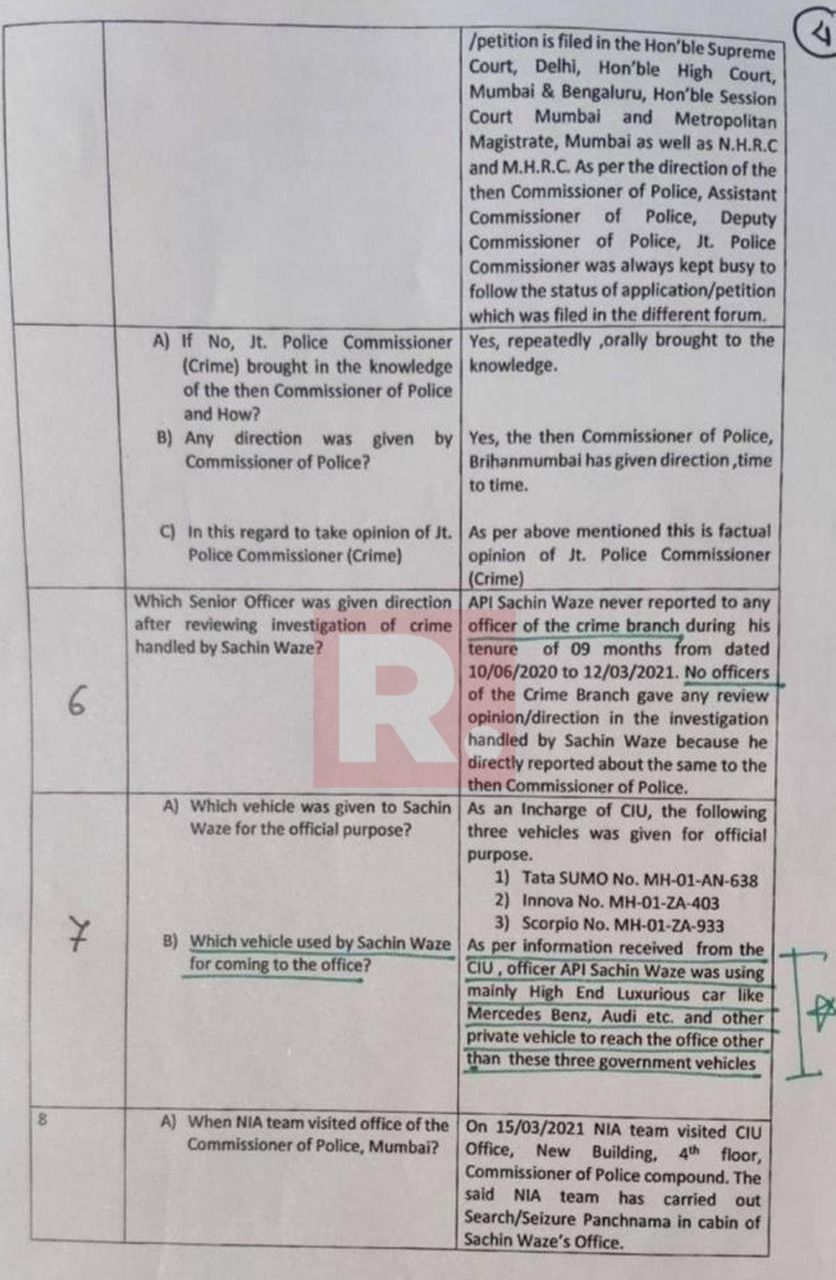 In a breaking and unexpected development on Wednesday morning, ex-Mumbai Police Commissioner Param Bir Singh has reached the National Investigation Agency (NIA) office in Mumbai even as suspended API Sachin Vaze is set to be produced at an NIA court later in the day on account of his current custody ending.

Top sources have informed that Param Bir Singh is likely to record his statement with the agency which is probing the murder of businessman Mansukh Hiren and the Anitilia bomb scare case. He is likely to be interrogated on the re-instatement of Sachin Vaze in the Mumbai Police force after nearly 16 years out following his suspension due to an alleged fake encounter case, the fact that Sachin Vaze worked under and reported to Param Bir (as mentioned in the report), and on how a growing number of luxury cars linked to Sachin Vaze were seen parked at the Mumbai CP's premises, and whether or not he (Param Bir Singh) was aware of this.

Param Bir Singh's visit to the NIA offices is the first sign of inclusion of the former Mumbai CP in the probe proceedings in the Vazegate cases and comes ahead of the Central Bureau of Investigation (CBI) recording the statement of advocate Jaishri Patil who had filed a PIL at the Bombay HC following which the court directed the central agency to conduct a preliminary enquiry into the corruption allegations levelled by Param Bir Singh against former Maharashtra Home Minister Anil Deshmukh.

Meanwhile, sources have informed that  Sachin Vaze's personal driver was interrogated by the NIA for six hours on Tuesday. The driver, who has been serving Vaze since 2012, was also reportedly in the active employment of the suspended API when the latter was surreptitiously leaving CST station on March 4. Sachin Vaze's driver was summoned on Tuesday after the new evidence was uncovered on Monday night following the recreation of Vaze at CST railway station and Kalwa station.